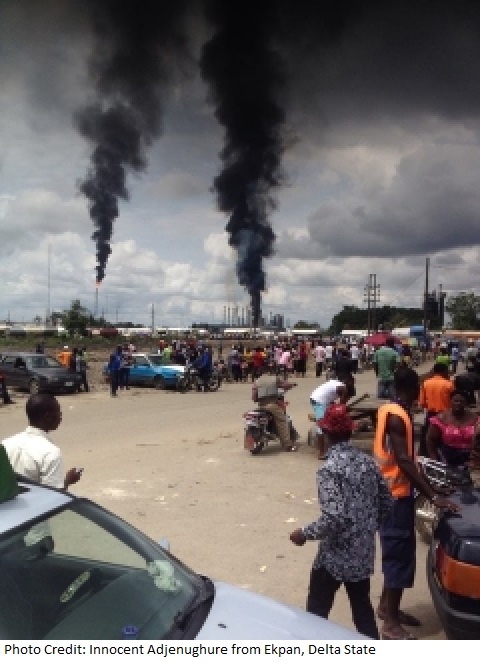 I do shake my head whenever I think of what Nigeria is being put through by some unrepented enemies of Nigerian state, i personally have shed tears when i looked at some pictures and videos of innocent Nigerians killed in the northeast, people slaughtered like chickens, some others where shot and killed in execution style, others were annihilated through the fire and burned alive, many more were killed in an unspeakable heinous ways. Imaging yourself been attacked by the dreaded Boko Haram savages, no one close by to help you escape. Your family, including your wife and six children are inside the house and your assignment is to save yourself and your family.

Iam sure you are not a Rambo, I don’t think you will be in possession of the equipments that equals Rambo’s, I don’t believe you will be in the right set of mind to depend your family and wade away those savages in such situation.

Many families have experienced this situation in the northeast, some of them have lost some members of their family, a brother to someone was killed in front of his mother, a 2years old was flinged from the hand of his mother and smashed by the head, a senior sister or a mother to someone was raped and murdered in full glare of her children, a husband to someone and a father to some children was heinously slaughtered and staked through the ass. These are the picture and videos from the northeast.

Now, let me take you through the war on our doors, the future war will be unimaginably brutal, we haven’t seen anything yet, it is not a prayer and neither was it a wish, it is a point that needs all of us Nigerians to painstakingly assess and argue on the situation, and quickly package a plan on how we all can sustain and survive through this planned annihilation of our people Nigeria is on the Brinks of war, a war we have never experienced before, a war we never wished for, though you may say ‘he ain’t serious’, but Iam serious, infact, Iam terribly dead serious.

If you all remember, just of recent, the prophetic TB Joshua was on the news, calling our attention to a war in the making, he refered to it as a foreign invasion. Prophet TB Joshua was explicitly very clear about the massage, he warned of Thursdays, Fridays and Saturdays, he warned us of an impending war, an invasion, a clear genocide in the making.

To refresh your memory, On Sunday 10th April 2016,
‘Prophet’ T.B. Joshua warned both Ghana and Nigeria of an impending foreign terrorist attack,

“Pray for these two nations – Nigeria and Ghana,” Joshua said near the end of his service at The Synagogue, Church Of All Nations (SCOAN), which was broadcasted live on his popular Christian television network.
TB Joshua further said,

“I am seeing an attack. It will be in a foreign way that the attack will come, not a local way. Every Thursday, Friday, Saturday, pray for these two nations for protection against foreign attack that will happen in any
gathering.”

These statements joined with your conclusion that TB Joshua has never failed in his prophecy will add to the contemplation of how could that be possible, we may continue to ask ourselves these questions, Iam rather calling for action.

Have you watched the latest Shekau video, where he narrated about his end, that his own is finished ? Could you remember he was always mentioning ‘Katsina’ in the video ? That is the path where the invasion will follow. Katsina is a border town with Niger, and Niger borders Libya, it is an international boundry leading straight to Libya, a war tone country. Shekau’s mentioning of Katsina was never of cowardice but of strategy, Shekau is handing over to ISIS in Libya, he only play the allegiance role, he is now a subordinate commander to the ISIS in Libya, the path is Libya to Niger and then to Nigeria.

In a little distance past, especially during Musa Yar’adua and Jonathan regimes, we were told times without number about ISIS weapons entry into Nigeria, they have mass stored weapons in the vast bushes in our landscape, they have transported cache of weapons into Nigeria, the time to use them will soon come; the time for the invasion will soon arrive, Nigeria may be run and ruined down, the war have already started, only that this time around, it started from the southeast, they came in Fulani herdsmen clothing, Nigeria may not be the same again, this is because the invasion have already started.

Police IG Solomon Arase have said some two weeks ago that, the herdsmen are not Nigerians, that they are chadians and Malians, these are two countries with internal war for over a decade, machenaries are easily hired from places like these, suicide bombers are radically available for some payments to the contracted suicide bombers family. Arase have since had encounters with this insurgents, and terrorists, he has confessed of their nationality and identity, the only thing that might have escaped his understanding is that, those are part of the clearing team of insurgents, it is just starting, those from Libya will soon be here, that is when Nigeria may not be the same again.

Now, you cannot denied that the international media have been saying it on the news that, those insurgents and terrorists fighting in Syria and Iraq are moving to Libya, but for what reason should they move from Syria and Iraq to Libya ? why ? ask yourself this question, it has alot of meaning. Shekau have submitted his allegiance to ISIS, and ISIS are moving to Libya, TB Joshua have said it, Nigeria will be invaded by terrorists and Enugu was attacked few days ago by people code named ‘Fulani herdsmen’.

They can travel through our vast forest undetected, we dont have enough helicopters to patrol these vast forest, we also lacked the manpower to manned these forest, ISIS are on the move, those in Enugu have since tested their wrath, in the northeast it was Boko Haram but now in the southeast it is the Islamic state, popularly known as ISIS.

Many reasons are undeniably the more reason we must remain our brothers keepers, on these, i need to call on the indigenous people of Biafra IPOB and the Niger-Delta avengers, and those agitators from both the north, south and the west to sheath their sword, the real war may be coming, we shall remain united, for when we are divided we will fall like a deck of cards, the Fulani herdsmen are just a little dust, the bigger dust may be by the corner, we should all come together and perfect a plan and strategy to stay alive.