ABUJA- PEOPLES Democratic Party, PDP Presidential Campaign Organisation, PDPPCO yesterday accused the All Progressives Congress, APC of coming up with a new Video designed to incite Nigerians to call for a full scale military intervention instead of President Goodluck Jonathan to return as President come March 28.

The PDP also accused the APC of plots to use the Video in inciting the people against President Goodluck Jonathan led Federal Government.

Addressing Journalists yesterday in Abuja, Director, Media and Publicity, PDPPCO, Chief Femi Fani- Kayode, who vowed that the PDP will not allow the APC rob them of their legitimate mandate which will be given to President Jonathan March 28, stressed that the government will not allow any military regime in Nigeria again, adding that the government will not tolerate any act of violence or any alleged attempt to assassinate anybody in the event Jonathan wins.

According to PDP, the Video which is tagged APC New Video was being sponsored primarily by money from foreign countries and by those it termed agents of foreign governments that are hostile to the interest of Nigeria especially by some groups in the Middle East.

He said,”Worst of all, the producers of this video were attempting to incite the Nigerian People against the Nigerian government. They went as far as to suggest that when the presidential election is fought and won and President Goodluck Jonathan emerges as the winner, that the people should call for a full scale military intervention rather than allowing Jonathan to come back. They also specifically asked for the targetting and assassination of key members of this administration and a number of it’s supporters in the event of a Jonathan victory in the coming elections.

According to Fani- Kayode said, “It saddens us that once again we have to bring to your attention yet another scurrilous attempt by the All Progressives Congress (APC) and their allies to denigrate, bring into disrepute and shame the Nigerian people, the Nigerian government and key government officials as we prepare for the presidential election scheduled for March 28 of this month.

“A new video has been produced by the dirty tricks unit of the APC. This video, according to their plan, is scheduled to be released to the Nigerian people in a matter of days. It is our sincere hope and desire that this will not be so. Unfortunately the desperation of the opposition party is such that they are prepared to do or say just about anything in order to denigrate the powers that be, to undermine our nation and to incite our people and to bring the President, the government and its officials to disrepute.

“The latest video, which was produced by a group called APC New Video, was quietly procured and secretly viewed by the intelligence unit of this Directorate. Amongst other things, they have listed as topics a number of issues and allegations some of which are listed below: 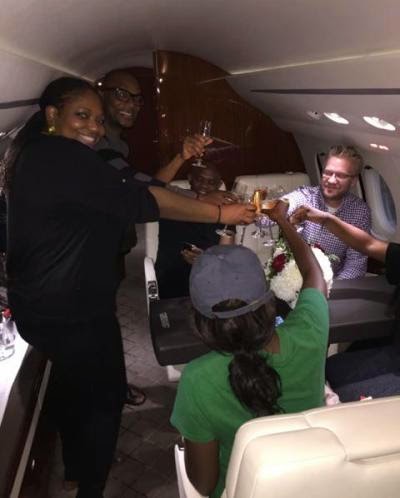 “That many Nigerians are using private jets and that this in some way is indicative of the corrupt nature of the Nigerian people, which of course is absurd.

“Secondly that in the last four years, the government has spent N48 billion on the Presidential Air fleet, which is a lie.

“Thirdly they raised issues about the kidnapping of the Chibok girls, insinuating that somehow the government had a hand in the whole affair and that they are hiding the girls.

“Fourthly, they raised issues about the comments of Steven Davis, the Australian negotiator who alleged that a ‘’friend’’ of the President, Ali Modu Sheriff, is sponsoring Boko Haram. They made all kinds of allegations including the alleged relationship between the President of Chad, the President of Nigeria and Ali Modu Sheriff. Needless to say these allegations are baseless and they are simply unbelievable. We just wonder how somebody in his right senses will come up with these kinds of allegations. There are many other things they have listed in this video which lasted about 9 minutes.

“Again, a lot of foreign footage is contained in the video which suggests that there is an international dimension to the production. This confirms our fears and belief that the APC is being sponsored primarily by money from foreign countries and by agents of foreign governments that are hostile to the interest of our beloved nation Nigeria. We also believe that some shady groups in the Middle East may well have a hand in the funding of this video production and in the construction and conjuring up of these baseless allegations.

“We say in clear terms that the video in question and the intentions of those behind it is reprehensible, irresponsible and it is unacceptable. We wish to take this opportunity to let the APC know that under no circumstances will we allow them to rob us of our legitimate mandate which, hopefully, will be legitimately and freely given to the President by the Nigerian People on March 28th.

“Secondly, we will not tolerate any act of violence or any attempt to assassinate anybody by their agents in the event of us winning and neither will the people of this country ever allow another military intervention. As a party we are committed to the democratic process. We believe that that is the only way forward.

“The President is committed to democracy and any attempt to bring about any form of unconstitutional government into the affairs of our nation by the APC after they have lost this election will not be successful. We will resist it with the last drop of our blood. We will protect the mandate that will be given to us by the Nigerian people to the last man.

“We at the PDP Presidential Campaign Organisation call on the faithful to stand firm and to come out en mass on March 28 of this month, regardless of the threats and intimidation, to cast their votes for President Goodluck Jonathan. Those of us who fear God and are true believers in God should understand that we are fighting for the very soul of our nation.