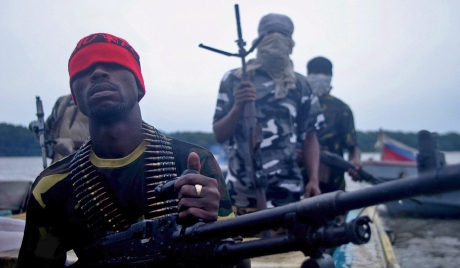 Pirates have hijacked an oil tanker and its crew in the waters near Lagos, the navy and a security company said on Wednesday.The vessel, called the Abu Dhabi Star, was seized on Tuesday night, around 14 nautical miles from the entrance to Lagos port, navy spokesman, Kabir Aliyu, told ReutersThe navy said the crew members had hidden in a room on the ship.

Security firm AKE told Reuters the boat was Singapore owned.
“Reports claim the tanker was laden with fuel and is now sailing into the Gulf of Guinea, which suggests that some or all of its cargo will be offloaded into a waiting vessel and subsequently sold on the region’s illegal fuel market,” an official at the company told Reuters.
Piracy offshore of Nigeria and other countries in West Africa’s oil-rich Gulf of Guinea is on the increase, and the region is second only to the waters off Somalia for the risk of pirate attacks, which drives up shipping insurance costs. Link: http://premiumtimesng.com/business/99030-pirates-hijack-oil-ship-kidnap-crew-off-nigerias-coast.html