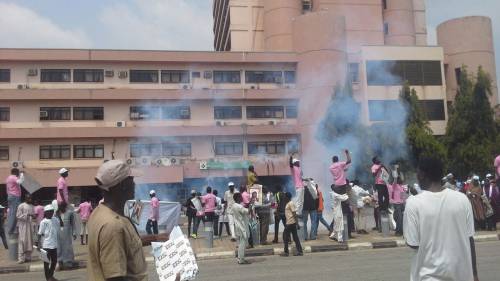 Members of the Islamic Movement of Nigeria (IMN) staged a protest in Abuja on Wednesday demanding the release of the organization’s leader, Ibrahim El-Zakzaky.

The protesters, who spread their message on social media using the Twitter hash-tag #BuhariFreeZakzaky, demonstrated in front of the National Assembly Complex and Federal Government Secretariat in the nation’s capital.

Armed police officers confronted the protesters and used tear gas to disperse them, according to witnesses’ photos.

Tear gas was used to disperse the protesters

Mr. Zakzaky has been in detention since December 2015 after military officials raided his residence. The siege followed a clash between the military and IMN members in Zaria, Kaduna State, in which some 1000 civilians were killed.

The Shiite organization has been protesting the federal government since the December massacre, but the government has yet to cede to its demands.