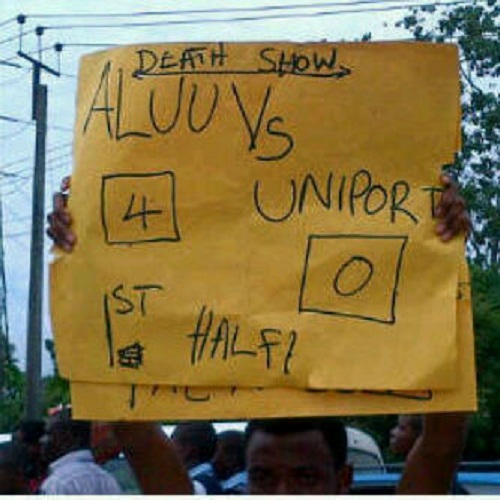 PORT HARCOURT: Students of the University of Port Harcourt, went on the rampage Tuesday protesting the murder of four of their colleagues by youths in Omuokiri-Aluu community last Friday and set ablaze no fewer than 12 houses in the community even as the university has been shut down by the school authorities.

Spokesman of the university, Dr William Wordi confirmed the closure of the school to the Vanguard on phone. He assured he was going to send an official statement. It was yet to come at the time of this report.

Students from other institution under the aegis of National Association of Nigeria Students, NANS, stormed the university to mobilise students in Port Harcourt to protest against the brutal killing of three of their colleagues and one other by riotous youths in Omuokiri-Aluu community last Friday.

The rampaging students blocked the East West road for several hours before allegedly marching to Omuokiri-Aluu community to start wrecking havoc. Community sources told the Vanguard that they torched about twelve houses.

Vanguard gathered that while the rampaging students were on the East West road, they reportedly insisted that they would only move out of the road after the Vice Chancellor of the University, Prof Joseph Ajienka had addressed them. The Vice Chancellor reportedly obliged them after securing assurances that he would not be rough handled

Sources said while the Vice Chancellor came to plead with the students to shun any temptation to be violent some of the students immediately started hurling sachet water at him.