This would be a grave crime against Nigeria’s ecological system and against nature and an act of environmental and ecological terror by the Nigerian military.

The image shows the forest set on fire as the army stands by. Sambisa is about 23,000 square miles and is a very large wonder of nature.

Defeating Boko Haram in the forest has proven complex for the army and with the time frame by the random date the President chose, it appears the soldiers decided to violate rules of Religion, nature and humanity by setting the forest, its trees with terrorists and captives ablaze simply to satisfy Buhari’s promise. 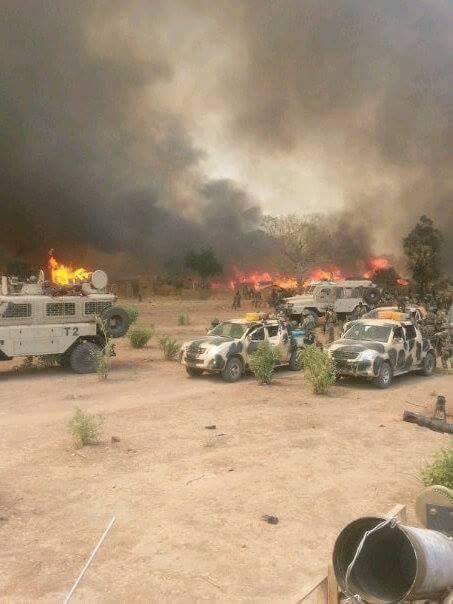 On December 24th, the Buhari government announced that it had ‘technically’ defeated Boko Haram. The deadline was only political and meant nothing to Nigerians who would rather volunteer to help battle and end Boko Haram sensibly than desire rush, unholy means.

As far back as 1989, when the US was faced with a similar standoff dilemma in Panama, they used loud speakers blasting rock music for days to rat out Noriega. Since then there are too many technological methods and intellectual ways to defeat a holed in enemy without destroying nature and perpetrating barbarism on the enemy and his abducted prisoners.

We are yet to receive details of how much of the forest was burned, however locals we have spoken to say they still hear the call to prayer from inside jungles around them indicating Boko Haram still has an insurgency presence in the many forests.

Boko Haram Friday night, killed 14 people and burned down an entire community they sacked possibly in retaliation of the government incendiarism.

Army Chief Lt. General Buratai is already facing condemnation for a recent massacre of Muslims in Kaduna in a similar colonial use of excessive and reckless force.

Setting Indonesia’s forests ablaze in October this year has been called the greatest crime against humanity of the 21st century.

Also: Article 51(5)(b), prohibits attacks that cause ‘excessive’ collateral damage to civilians or civilian objects. https://www.icrc.org/eng/assets/files/review/2010/irrc-879-bothe-bruch-diamond-jensen.pdf

“I advise you ten things: Do not kill women or children or an aged, infirm person. Do not cut down fruit-bearing trees. Do not destroy an inhabited place. Do not slaughter sheep or camels except for food. Do not burn bees and do not scatter them. Do not steal from the booty, and do not be cowardly.”

Some Zanadiqa (atheists) were brought to ‘Ali and he burnt them. The news of this event, reached Ibn ‘Abbas who said, “If I had been in his place, I would not have burnt them, as Allah’s Apostle forbade it, saying, ‘Do not punish anybody with Allah’s punishment (fire).’ I would have killed them according to the statement of Allah’s Apostle, ‘Whoever changed his Islamic religion, then kill him.’” (Sahih Bukhari Volume 9, Book 84, Number 57:)

The Prophet sall Allahu alayhi wasalam said ” Do not punish anybody with Allah’s Punishment (fire), so because of this hadith we will find that punishment with fire is only for Allah the Most High to use on the disbelievers/heretics and sinners.