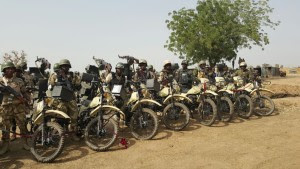 To meet up with the renewed strategy of clearing the remnants of Boko Haram terrorists, the Nigerian Army today inducted a combat motorbike battalion at the Headquarters of 25 Task Force Brigade, Damboa, Borno State.

The Chief of Army Staff (COAS), Lieutenant General Tukur Yusufu Buratai while inducting the unit stated that the essence of the battalion is to open and secure motorways from various towns to and from Maiduguri and other parts of Yobe State.

Prior to the induction and launching ceremony, the Chief of Army Staff took time off to see and address troops located at Delwa and Bulabulin before arriving Damboa. On arrival, he inspected a Quarter guard at the Brigade’s headquarters.

Thereafter, he was briefed by the Brigade Commander, Brigadier General Lawrence Adeleke Araba and then showed him some weapons, vehicles and Improvised Explosive Devices (IEDs) making machines and equipment the formation recovered when they cleared Boko Haram terrorists camps at Talala and Ajingin recently.

Inducting the combat motorbike unit, the Chief of Army Staff stated that the battalion will serve as a force multiplier in the clearance operations of remnants of Boko Haram terrorists. He stated further that with the induction of the unit, troops presence will be available along the roads thus keeping the roads open and safe.

A visibly elated Secretary of National Union of Road Transport Workers (NURTW), Borno State, Alhaji Ahmadu Musa showered encomiums on the COAS and the Nigerian Army for their sacrifices and the initiative that would enhance safety and security on the roads. He promised the continuous support of his organization to the Army towards the mopping up of the remnants of the Boko Haram terrorists. He further assured the COAS that they will display and distribute the banner containing the photographs of the wanted suspected Boko Haram terrorists to all their branches and other chapters.