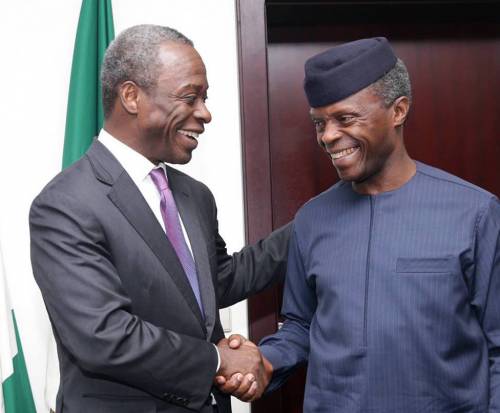 In December 2009, Mr. Jide Zeitlin withdrew his nomination as President Barack Obama’s nominee for financial reform at the United Nations.

His retreat was announced a few weeks after the allegation of his dishonest business dealing was exposed by a New Delhi Court in India.

Eight years after the scandal, Mr. Zeitlin has worked his way back to Nigeria to corner a juicier deal as the Chairman of the Board of Nigeria Sovereign Investment Authority (NSIA).

The acting President Yemi Osinbajo inaugurated the board yesterday at the State House Abuja and announced the appointment of Mr. Zeitlin.

According to a report published in Washington Post in December 31, 2009, Mr. Zeitlin, a former Goldman Sachs executive and telecom entrepreneur, had been accused of insincere business dealings with Indian contractors who said they have not been paid for building wireless towers throughout India in spite of the agreement.

His company, Independent Mobile Infrastructure Limited has been declared bankrupt by Indian court for failing to pay about 2.4 million US Dollar in supplies, services and interest to a client.

The client, Unitech Power Transmission, charged that IMIL failed to honor agreement to pay for 34 wireless towers as part of a larger deal to construct a network of 137 towers throughout India.

IMIL had awarded contracts in 10 telecom circles of the country including Haryana, UP East, UP West, Rajasthan, Karnataka, Maharashtra, Orrisa, Gujrat, Chennai and Tamil Nadu.

In almost each of the circles, there are at least 10 contractors whose dues are outstanding on IMIL, the Times of India quoted one of the victim contractors at Lucknow,  Qausar Shoib.

Zeitlin’s ally in India, Prem Bajpai, was also accused of duping 16 telecom sector contractors based in Lucknow of an estimated Rs 4.5 crore has been arrested.

Zeilin himself was slapped with criminal charges like cheating and dishonesty, including delivery of property and criminal breach of trust.

SaharaReporters investigation reveals that his telecom company reported on its financial status last in 2015 with a capital liability of almost 10 million USD.

In addition, the IMIL boss was also accused of identity fraud for sending an email to investors pretending as chief executive of a rival company.

Though Zeitlin testified before Congress that the email was a prank, but such misconduct is a big deal in the United States, enough to lose public trust.

Now that Zeitlin has been appointed as Chairman of NSIA, he will be overseeing Nigeria’s huge investment portfolio abroad, which has now been increased by additional 500 million US Dollar, according to statement by the presidency.

Recall that Zeitlin was also invited in 2012 as a member of NSIA when ex-President Goodluck Jonathan signed the Nigerian Sovereign Wealth Investment Act 2011 into law.