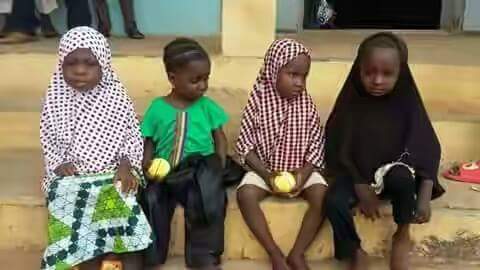 At least 13 young children have been detained for two weeks so far by the Jos state government in Nigeria’s northern region since a recent ban on activities of minority Muslims of the Shia ideology.

Held since Wednesday the 12th of October, 2016 the kids were charged for “disturbance of public peace.”

These minors seen in various pictures being held in cells have since been denied bail as against the stipulations of the Nigerian constitution and the international laws on the rights to justice and global regulations on the protection of minorities as laid down in the Convention on the Rights of the Child.

The ban on Shia activities ahead of the global Ashura commemoration, by Kaduna state governor Nasir el-Rufai which was duplicated by the Jos governor Simon Lalong inspired attacks on this minority group by civilians in suit with police and the army, with dozens of commemorators killed and others arrested and locked up. Among those locked up were several minors.

A list provided by the Islamic movement of Nigeria has about 13 names of minors. The at least 2 million strong minority IMN religious group has challenged the recent apparent repression of their rights to freedom of worship and assembly.

What is mind-bending is that tons of youth were seen and caught in images attacking, killing, robbing and burning the minority Muslims and their properties, with a list of 71 alleged perpetrators even published by the victims, but not a single of these youth has been arrested since for these heinous and deadly hate crimes.

We beg the Buhari government to act in the interest of justice, peace and humanity. Children hold the promise of the future. No Nigerian, adult of child should be denied bail. No group, large or small should be targeted, persecuted and repressed by the democratically elected government or civilians enjoying government’s immunity assurance. By detaining the victims instead, those who attacked them are being encouraged on as a new Boko Haram, who believe they are above the law and supported by the government to oppress, attack and kill innocent citizens with impunity.

We beg the Buhari government to rather go after the murderers who killed religious practitioners across the north and hastily set free and compensate the children victims.