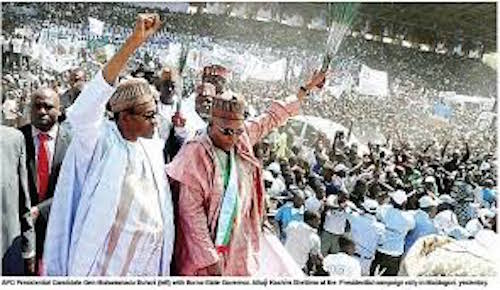 On a Very Sad Note;

Fiery looking security forces led by Borno state commissioner of police Mr. Damian Chukwu mounted blocks on our way to our home base BAMA, after spending 3 years as IDPs in various camps and locations within the state capital (Maiduguri) this afternoon.

The police commissioner while addressing us at the road blocks mounted by his operatives just a little drive after university of Maiduguri along Bama road, says “Allowing you to go to BAMA is like allowing you to commit suicide”. Thereafter he ordered his men to arrest whoever that insist to continue on the said journey.

Does that mean all the claims by both the military and the government on the improved security of the area is just a mere fallacy to deceive us? For how long can we be held refugees in our land? Any hope at sight?

BAMA IDPs (When the condition becomes critical Transfer is necessary)
THE recent move by the IDPs to Treckg Back to Bama Despite the dangerous nature of the Axis is clear indication that their Condition at the Various Camps is pathetic and not Encouraging at All..

While i call on the concerned Stakeholders to swing into action and sincerely address this uprising ..

Despite the efforts by the relevant Stakeholders both at the state and National level, alot needs to be done to improve the condition of this People and work Round the clock to ensure others IDPs will prepare to stage a similar move

LASTLY I called on all concern individual’s to intervene and find a lasting solution and at the same CALLED ON ALL THE comrades and self acclaimed HON not to play politics with this move and criticise one another,HOWEVER share opinion and ideas on the various platforms so that our brothers/Sisters will get the proper Attention and Care their Deserve as an indigine and citizen of Nigeria..