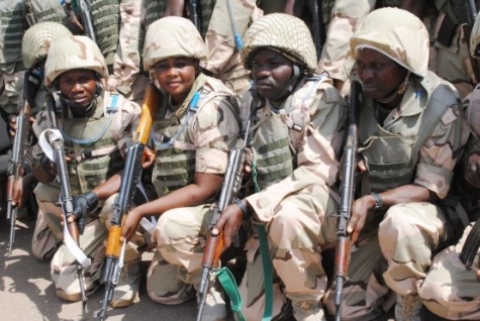 About 190 Nigerian troops were ambushed a few kilometers from Okene in Kogi state today. The attack took place around 6: 05 AM Nigerian time as militants cut through the convoy of Mali-bound Nigerian army peacekeepers traveling in three luxurious buses via Kaduna too Bamako, Mali. The militants decimated the convoy with the aid of IEDs planted on the highway and began firing on the troops afterwards.

The soldiers were under escort at the time and the military escorts alter returned fire, but the assailants who were parked on both sides of the highway escaped the scene after two soldiers had been killed and several others injured.

Nigerian Army spokesperson, Brigadier General Bola Koleosho confirmed to Saharareporters by phone that two soldiers were killed while the bomb explosion injured four others. The wounded soldiers are receiving treatment at the Federal Medical Center in Okene.

All praise be to almighty Allah the helper of less privileged once, praise and blesses of Allah be upon his messenger the trustworthy,

After that: We JAMA’ATU ANSARUL MUSLIMINA FI BILADIS-SUDAN are gladly informing the general public, especially those in the black Africa, that today being 19th days of Jan, 2013 by 60:00 am at itape arena ekehi local government kogi State Nigeria, with the aid and guidance of Allah we have successfully execute our first attempt in griping the Nigerian army troops that were aim to demolish the Islamic empire of Mali.

We are equipped and waiting for any slightest attempt of Nigerian army, moving towards the Islamic empire of Mali.

And we are warning the African countries to confiscate their effort for helping western countries in fighting against Islam and Muslim, if not we are Stanly assuring them, particularly Nigerian government to be prepare and be at utmost ready for facing difficulties from JAMBS any where any time, may Allah help us and grant our wishes. -Desert Herald publication

The attack is coming on the heels of disclosure by the Chief of Army Staff Azubuike Ihejirika last week that Mali trained Boko Haram sect militants have arrived Nigeria in large numbers to carry out attacks on various targets in the country.