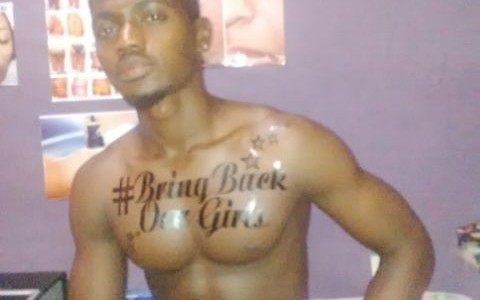 With the list of artistes and celebrities supporting the #BringBackOurGirls movement growing by the day, Magikal Entertainment’s recording artiste and Nigeria’s fast-rising Hip-Hop act, Brain, have also join the train by inscribing the hash tag on his body in a form of a Tattoo.

Explaining his reason for this act, the young rapper disclosed that he’s pained just like every other people that have been calling for the release of these innocent girls that have been traumatized with this kidnapping. “I just felt the need to express myself in this way. Hiphop is about expression and standing for what is right and just. So I’m joining millions of people world-wide to appeal to the Boko Haram sect to release these girls. Their parents would have been going through what would probably be the darkest period of their lives. And I strongly believe this is the right time we as a country should re-trace our steps and the government should get their priorities right by providing adequate security for every Nigerian irrespective of where they are or who they are.”

Speaking further, “it’s not all of us that will be fortunate to have private securities and guards. It’s the responsibility of the Nigerian government to make every of her citizens safe wherever they reside. Boko Haram is satanic and it is not of a Muslim thing as been touted by the sect because they are killing both Muslims and Christians in their bombings and there’s nowhere in the Quran that bombing or kidnapping is been preached”, he added.

In the last one month the Chibok girls have been kidnapped, there had been an international outcry by artistes and celebrities urging the sect to release the girls.

The group stormed a secondary school in the remote north-eastern town of Chibok, Nigeria, on Monday, April 14, 2014 and kidnapped almost 300 girls who were ferried into the thick forest of Sambisa.