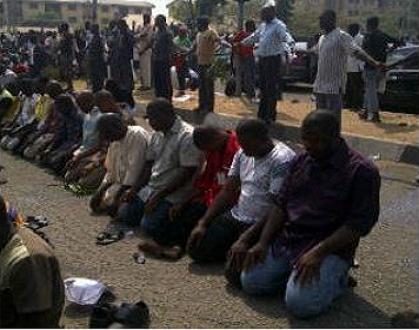 NewsRescue- Nigerian Muslims, frustrated with the peril caused by the deviant Boko Haram terrorist cult, led by the ‘self infatuated’, psycho Abubakar Shekau, are increasingly publicly declaring their unambiguous condemnation of this terrorist sect that has made the lives of Muslims and Christians in Nigeria unbearable.

The latest to loudly join this group of fearless, vocal critics of the terror reigning group of miscreants is a most famous Islamic cleric, Sheik Abubakar Gumi.

From the pulpit of the Sultan Bello Mosque in Kaduna this Friday, Sheik Gumi declared in clear, blunt and un-minced terms, that those killing innocent Muslims and Christians, men, women and children will never see the gates of heaven, unless they repented for their sins.

In similar pattern, in June this year, MuslimsAgainstTerror.com, a highly vocal Muslim group, prepared and distributed official statements and press documents declaring the unreserved condemnation of Boko Haram terrorist activity, and inviting upon Nigerian clerics to be fearless in the condemnation of these criminals, hiding in the midst of good people. MuslimsAgainstTerror.com went ahead to call for Muslims to defend Churches of their Christian brethren, by forming human shields if necessary.

With the shabby and criminal embedded security services and politicians serving the Nation, Nigerians are literally on their own in dealing with this threat, and such proactive steps come with their risks, however, Sheik Gumi in his Ramadan sermon, called upon all Muslims and Muslim leaders to make similar loud, Islamic declarations against these deviants, and as encouraged by the Muslim group, fear none but their Lord, Allah. With this, the defeat of Boko Haram will be guaranteed.

According to SaharaReporters, a Kano-based Islamic scholar told them that he would not be surprised if some extreme elements tried to attack Mr. Gumi. He stated that the sheik was right “in making it clear that all those carrying out suicide bombings and killing people are not real Muslims, but misguided heretics who have completely deviated from Islam.” The scholar praised the sheik for “preaching that there is no justification for those using bombs to kill fellow Muslims and non-Muslims with whom there should be neighborly trust.”

Mr. Gumi’s sermon against the incessant violence in Nigeria is widely seen as a direct reproach to Boko Haram militants who frequently claim credit for deadly explosive attacks. The source who attends Sheik Gumi’s mosque said Muslims all over Nigeria should be proud that the cleric has affirmed that any suicide bomber who kills innocent people “will not see God.”

“Sheik Gumi kept repeating that there is no way those doing [these killings] will make heaven, without repenting to Allah.”

Mr. Gumi also challenged other Muslim clerics and teachers to boldly preach against killings and other acts of violence that threaten to tarnish the image of Islam.

The Kano-based scholar urged Muslims in the country to pay heed to other messages from the courageous cleric in Kaduna. “If other clerics become like Sheik Gumi, we will soon overcome the situation we are facing.”

In his sermons, Sheik Gumi has charged all Muslims to stand up, and save their religion from present challenges. The cleric also condemned today’s suicide bombing attack that targeted the Emir of Fika.

Sheik Gumi has called on those mounting the attacks to renounce violence, and suggested that they be granted the same kind of amnesty extended to Niger Delta militants.
The cleric, who has a reputation for fearlessness, is the son of the late famous Sheik Abubakar Mahmud Gumi. He is based in Saudi Arabia where he lives with his family.

With the increased condemnation and cooperation with Nigeria’s security services, leading to an effective clamp down on Boko Haram terrorists in North Nigeria, Muslim leaders have increasingly been victims of deadly terror attacks.

The Attack on the Emir of yesterday is the second similar attack on Muslim leaders in northern Nigeria, post Friday prayers in recent weeks. Friday prayer attacks have become as rampant as Church bombings were weeks earlier.

Also last Thursday in Kaduna,a suicide bomber was blown to death by his own bomb, after Kaduna youth caught him on mission to kill the district head, Abduwahab Aliyu in Mahuta, Kaduna outskirts.
According to an eyewitnesses, Bala Abubakar, “the incident happened at about 10pm on Thursday when some suspicious persons entered the village and some residents started questioning them and discovered that they were armed.

“The youth were able to disarm one of them who admitted that they were on a mission to kill the village head, for allegedly exposing their members.

“The other suspects escaped and it was when the people were pursuing them that a bomb exploded on the one who had been apprehended and he died instantly.”