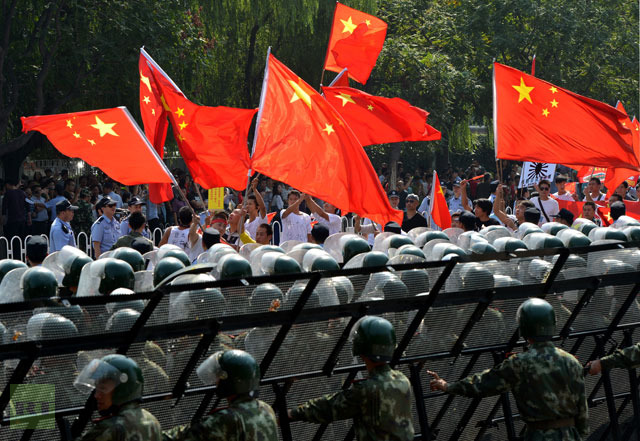 DESPITE her advances in technology, the Nigerian Leader of the Kuu Lam Chee Brotherhood, an order of avatars and robe travellers, and a British trained social scientist, Chief Nwankwo Nnabuchi,says Japan is locked in a secret battle to free herself from continued slavery.

In an exclusive interview with this reporter recently in Awka, the Anambra State capital in Eastern Nigeria, Nnabuchi said Japan is a colony of the United Staes of America (US), and of a major concern to China and Russia.

”US has colonised Japan for more than 70 years, still does so, and nobody knows when the colonisation will end”, he said.

He argued that if Washington withdraws her military bases, and nuclear arsenal and missile defence system from Japan, in addition to granting Japan sovereignty status in foreign, economic and defence polices,” then Japan will demand reciprocal actions from Russia and China”.

According to Nnabuchi who said he was speaking for members of the inner spiritual circles of the world, ”we do know, by the nature of Russia, that Moscow will oblige Japan such a request.

”However, the deteriorating relationship between US and Russia, more so with US bases, missile shields and nuclear arsenal still in Japan, it is likely that the Russia Federation will be reluctant to shrink her defence line. Russia is likely to retain Japan’s northern islands as buffer zone in containing US expansion and aggression”.

Japan has a population of 126.6 million people, with $4.19 trillion, GDP and annual military budget of $40 billion. She is the third largest economy, behind US and China.

By 1937, Japan was already at war with China, and this dragged on until 1941 when Japan attacked Pearl Harbour in Hawaii, US and therefore created another theater of war, as an integral part of the World War 2, in the Asian continent.

As Japan was about to surrender to Russia, US dropped two atomic bombs in civilian population of Japan in two different cities. This prompted the surrender of Japan to US,

For the Nigerian seer, ”the imperial Japan was the first nation to attack China, Russia and US during the World War 2. She lost the war. The circumstances of a defeated nation made her a colony of US and the loss of Northern Islands to Russia and the latest occupation of two Western rocky islets by China.

”Japan accepts US occupation of her country but remains resistant to the annexation of Northern Islands by Russia or the latest occupation of two rocks off Japanese coast by China. It is doubtful whether China and Russia would relinquish these areas as long as Japan remains a colony of US. Tacitly these three powerful and permanent members of the Security Council are playing security and political games in Japan.

”Shinzo Abe has been struggling to tinker with the Pacific Constitution that forced Japan into an abnormal country. As a member of G7, Japan totally depends on US, and she is being used as the principal Prop in US expansionism in Asia.

”As a dependant colony, Japan is being used to attempt to contain China, and possibly check the activities of Russia in the pacific coast. However, it is unlikely, that US will allow Japan to be an independent nuclear nation because of history and lack of trust. US prefers her colonies remain under her nuclear umbrella and missile defense system.

”Shinzo Abe has consistently visited the shrine of his parentage. These visits appear to be offensive to China, but the true reason for these visits may not necessarily be targeted at China.

”If Abe’s ancestors were victims of US defeat and colonisation, and if Abe succeeds in making Japan a ‘normal sovereign state’, backed with advanced weapons including nuclear weapons with the capability to deliver same, it is likely that Abe’s ancestry will want US to have a taste of the food they forced the people of Japan to swallow in 1945.

”Western diplomats as well as foreign and defence policy formulators insinuate that Russia colonised former Soviet countries. If the foregoing is anything to go by, it carries an implied view that Russian colonisation was only for 46 years and ended with the dissolution of the Soviet Union”.