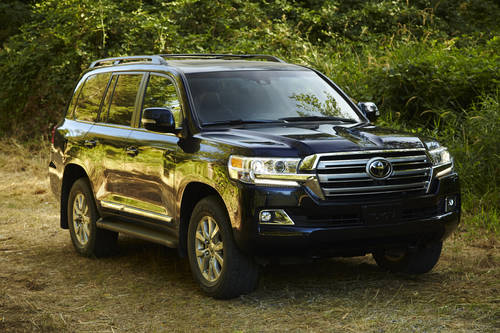 The Senate has started taking delivery of 108 Toyota Land Cruiser Sports Utility Vehicles (SUV) it ordered for members at the cost of N3.8 billion, Daily Trust on Sunday has gathered.

Our correspondent learnt that the first set of the cars, numbering 36, was delivered last Tuesday and distributed to Senators last Wednesday.  There are indications that the Senate purchased the vehicles at double the price of each in the showroom in Nigeria. The lawmakers bought each for N35.1 million, but checks by our reporter indicated that a Toyota Land Cruiser SUV V6 2016 model is sold at N17 million.

The delivery is coming in spite of the controversy surrounding the purchase of the vehicles. The cars, it was further gathered, were distributed the same day some senators told the Senate President Bukola Saraki that standing committees could no longer perform their statutory functions as a result of the paucity of funds.

Saraki had, in February, acquired official cars at the cost of N330 million. The cars were purchased despite reservations expressed by prominent Nigerians.

A source privy to the delivery of the cars told Daily Trust on Sunday that one senator had been given from each of the 36 states of the federation.

“Since only 36 were delivered at a meeting on Tuesday, it was agreed that one senator should be given from each of the 36 states of the federation. They were given the cars on Wednesday,” the source said.

It was gathered that another set of 36 cars would be delivered in two weeks, and the supplier would deliver the last batch of the same number in early May.

In all, a total of 108 cars would be supplied by the contractor and each senator, excluding the Senate President, is expected to get one. It would be recalled that the senators, in August last year, received car loans.
Speaking on the delivery of the cars, a senator said the contract for the supply of the cars had been reviewed upward in view of the foreign exchange crisis.

“The cars were initially pegged at N35 million, but now it has been reviewed upward to N55 million. They will soon bring the remaining cars, but most of the senators close to Saraki have been given. My friend started driving his own on Thursday, “ he said.
He decried the decision by some of his colleagues to sell theirs in order to pretend as if they never received them. “Nigerians should watch out. Our colleagues have started receiving the cars, but some have decided to sell theirs because they don’t want their people to know about them.

“If you collect the cars, and you think you are doing the right thing, why won’t you drive it?  Are they [Senators] not the ones who insisted on buying the cars? If it is legal and right, let them drive the cars to their constituencies,” he said on the condition of anonymity.
When contacted, the spokesperson of the Senate, Aliyu Sabi Abdullahi, said the cars were a necessity and not a luxury.

“Let us face the reality, if Special Advisers can use cars like this as official cars, then why the noise about ours? A senator is representing a constituency, a district.  Do you expect him to be trekking to discharge his duties? These cars are not a luxury, the cars are a practical and absolute necessity,” he said in a phone interview.

“The cars are capital projects while the public hearings are not. There is a difference between capital and recurrent expenditure,” he said.

It would be recalled that senators, during their sitting on Wednesday, told Senate President Bukola Saraki that paucity of funds was hindering the discharge of their legislative duties.

Commenting on the purchase of the cars, Barrister Audu Bulama Bukarti of the Bayero University Kano (BUK)  said the senators were unaware of the public perception about them.

“In my opinion,  the Senate’s purchase of these exotic cars at a time Senate standing committees are finding it difficult to carry out their constitutional and statutory functions over alleged paucity of funds is, to say the least, unpatriotic, selfish, contemptuous, callous and ill-timed.
“One cannot help but wonder where the Senate got the money from, since the budget is yet to be passed. Do they have the powers to spend such a huge sum without appropriation and authorization? Or are they just daring Nigerians?
“From the Senate’s action on the CCB, CCT Act and ACJA Amendments, their attitude to the 2016 budget and purchase of these cars,  I am compelled to conclude that the senators are unmindful of public perception, and our senators can go to any length to achieve their goals even at the expense of Nigerians,” he said.