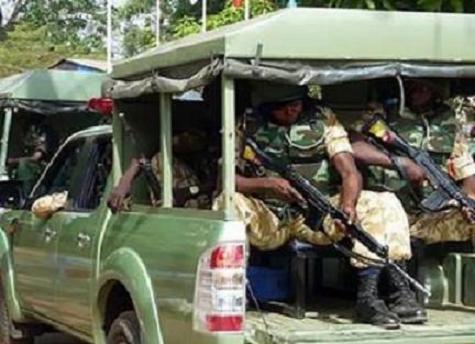 The STF(Security Task Force) has been accused of causing terror in Plateau.

By Andrew Ajijah and Sani Tukur

The ten civilians that were killed in Heipang, a suburb of Jos, the Plateau State capital, on Monday evening, were murdered by security officials, a witness and other residents have said.

Ten people were killed when gunmen opened fire at a beer joint near the Jos airport.

The residents have now said that members of the Special Task Force, STF, an inter agency security outfit in the state, were responsible for the killings

One resident of the area, Gyang (second name withheld for security reasons) , who said he escaped the attack by whiskers, informed PREMIUM TIMES that the killings were carried out by the STF.

Mr. Gyang said the attackers wore army uniforms and drove a Toyota Hilux van with military number plates, adding that some of the attackers are known to the villagers.

“We were just drinking at a local beer joint which is very close to the road side, then all of a sudden, a Toyota Hilux pick up van stopped near the  joint and the occupants of the van opened fire on the people drinking beer; we even know some of them and they came in army vehicle,” he said.

He said the gunmen took them by surprise, as they suddenly started shooting sporadically at the people drinking beer at the joint.

“On hearing gunshots some of us escaped and ran, but we later came back to see 8 dead bodies of people killed by the gunmen,” said Mr. Gyang.

Some other residents also corroborated his claims.

The Chairman of Barkinladi Local Government Area, where the community is located, Emmanuel Loman, also said that the attack may have been carried out by security personnel.

Mr. Loman, at a press conference on Tuesday, called on the Chief of Defense Staff to immediately commence investigations on security agents sent to Plateau State to maintain peace and order.

He said some security personnel aggravate the crisis in the state when they compromise on their duty and kill innocent people without a cause.

The council chairman alleged that one of the suspects who carried out the mayhem was apprehended by a vigilante group in the area.  He said the apprehended man confessed to the crime, and identified himself as Salisu Gidado, a Corporal with the Mobile Police Force serving with the Special Task Force.

He appealed to the Chief of Defense Staff to “order a thorough investigation of those attacks and any role of the STF personnel and fifth columnists among them and in particular to establish the role played by one corporal, Salisu Gidado, an STF personnel in the massacre that took place at Heipang.”

According to him the alleged perpetrator was receiving treatment at the Plateau Specialist Hospital in Jos.

“The said Salisu Gidado is presently receiving medical attention in the hospital,” he said.

When contacted, the spokesperson of the STF, Salisu Mustapha, denied that the attacks were carried out by the STF.

“There is no way the attackers will wear uniform and even use army vehicle, it is not true, I have been disputing this all day, it is just not possible,” he said.

He, however, agreed that the attack occurred and that eight persons died on the spot, while two more died on Tuesday while receiving treatment at the hospital.

“The gunmen opened fire indiscriminately on customers and killed eight on the spot while two others died later as a result of the gunshots wounds they sustained,” Mr. Mustapha said.

He said some residents had given the STF useful information on the attack, adding that the inter agency outfit is working on those information and intensifying efforts to arrest the perpetrators of the attack.

The Chief Medical Director of the Plateau Specialist Hospital, Saminu Gidado, said there are two victims affected by the attack in his hospital. He said the victims are responding to treatment. Link: http://premiumtimesng.com/news/108889-security-officials-killed-10-civilians-in-jos-witness-residents-say.html