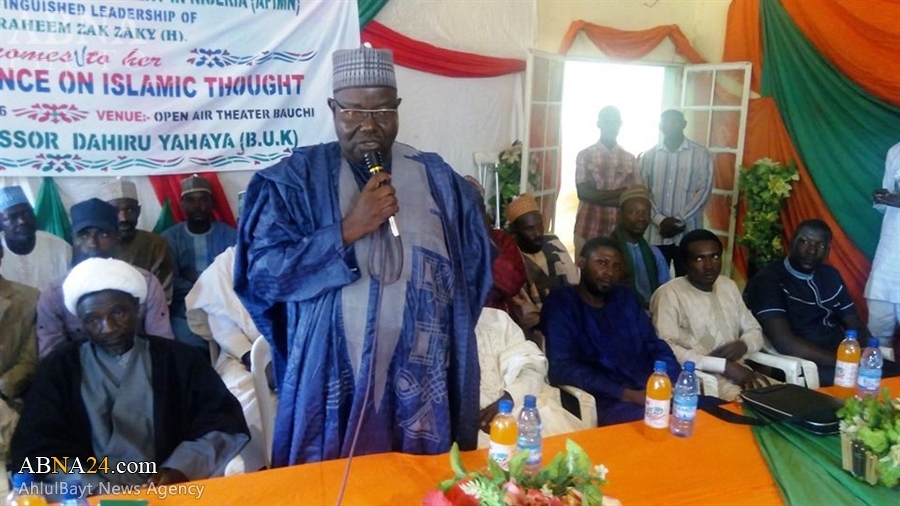 The Seminar on Islamic thought, is an annual event of the Academic Forum of the Islamic Movement in Nigeria (AFIMN). This year’s event was conducted in Bauchi state of Nigeria on Sunday 14th August 2016.

ABNA– The Seminar on Islamic thought, is an annual event of the Academic Forum of the Islamic Movement in Nigeria (AFIMN). This year’s event was conducted in Bauchi state of Nigeria on Sunday 14th August 2016.

Speakers were invited from different schools of thoughts to deliver lectures Centered on unifying the Ummah against oppression.

A renowned Sunni Cleric, Shaikh Idris Abdulazeez delivered a lecture on the present state of the Muslim world and the challenges ahead.

In his speech he focused on the major problems of the Muslim world which he said is disunity, lack of understanding and respecting the views of others.

The cleric further stressed on violation of  human rights and Oppression, he said it should be taken out of Muslims societies.

The Cleric showed his dismay on how IMN members were massacred in Zaria. He further expressed his disappointment on how  government is handling the issue of prosecuting the murderers and payment of compensation for the lives and properties destroyed in the pogrom.

The Cleric send his message of condolence to Sheikh Zakzaky and pray for his quick recovery.

Barrister Muhammad Abubakar Difa gave a comprehensive lecture on citizenship and the rights of citizens as enshrined in Nigerian constitution.

Just before Barrister Difa’s lecture, Sayyid Badamasi Ya’qub gave a brief account of the deadly missions of enemies of peace and humanity against Sheikh Zakzaky and explained to the gathering in detail the present health condition of the revered Leader and the need for his unconditional release for proper medication.

In his speech , Professor Dahiru Yahya called on all people to stand against oppression and injustice, he said Shia Islam is a pure Islam that came from the holy Prophet of Islam Muhammad (S) through his pure progeny.

The renowned Professor also declared Sheikh Zakzaky as an icon of truth and Justice with millions of followers that are uncrushable.

In his brief speech, Alh Nuru Adam Hakimin Bauchi expressed his happiness on how the program was conducted peacefully he further stressed that Sheikh Zakzaky is a man of honour with full rights.

Comrade Emmanuel Barde, the secretary general of the nineteen northern state CAN youth, expressed his gratitude to AFIMN for giving him the opportunity to Join the Seminar, and showed his love and concern to IMN members.

He thank IMN members for their humanitarian activities and the practical demonstration of peace and unity.

He also forwarded the demand for the perpetrators of the Zaria Massacre to be brought to book.