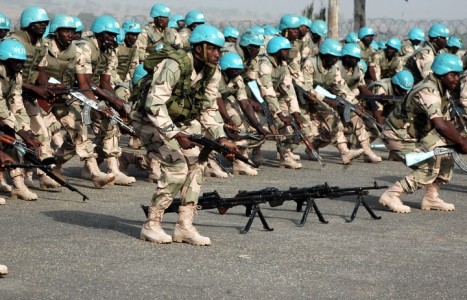 The condition of Nigerian troops in Mali is quickly sliding from bad to worse as inadequate supply of provision is forcing the contingent to solicit food from locals, PREMIUM TIMES can exclusively report.

According to a reliable defence source who asked not to be named, the Nigerian contingent solicits food and handouts under the guise of “courtesy calls” to community leaders in Mali.

After one of such courtesy calls on Monday, the troops received a handout of a cow and 50 bags of rice from the Prefect of Tuban in Banamba region.

“Our officers and men have resorted to begging locals for cows and rice for survival,” said the official.

“This is done by way of courtesy calls. They invite the prefects of the locals to our camp for visits. The prefect of Tuban (Banamba Region) visited today (Feb 11) with a cow and 50 bags of rice.”

Last week, PREMIUM TIMES exclusively reported that the initial 162-soldier contingent is suffering severe food shortage and a dip in morale as troops were forced to skip meals.

Our defence insiders said there has been no improvement in the provision of food.

However, the Director for Defence Information, Mohammed Yerima, a Brigadier General in the Army, told our reporter over the telephone that any insinuation of food shortage is not true.

“We have provided the contingent with enough food and fund to last them for the initial three months. Is Nigeria not bigger than that?” he said.

Contrary to information from the Ministry of Defence that Nigerian troops are involved in combat and have advanced northward toward the city of Gao, military insiders said the Nigerian contingent is still stationed at the Force Headquarters in Bamako.

We learnt that shortage in armaments has prevented the deployment of soldiers to combat positions. And many soldiers are yet to be paid their monthly sustenance allowance.

As of Monday, there were 210 soldiers in Mali with 70 more billed to join them on Tuesday.

President Goodluck Jonathan promised to deploy 1,200 soldiers as part of Africa-led International Support Mission to Mali (AFISMA) but is having great difficulty meeting up with that number.

Mr. Yerima said the figure we cited is incorrect. But our sources dismissed the denials, saying Mr. Yerima’s job is to make the Nigerian military look good.

“We have over 500 troops in Mali and Niamey (Niger Republic),” he said.

Since we are not reporting on Niger, we had expected him to tell us how many soldiers Nigeria has on ground in Mali.

Read our last week’s detailed report on the hardship troops are facing here.