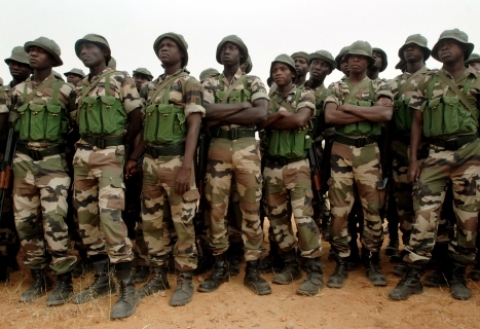 SaharaReporters has learned that up to 22,000 troops fighting Boko Haram in the Northeast of Nigeria may have not received their full allowances or full salaries for several months, according to soldiers speaking on the request of anonymity.

Some soldiers, speaking to SaharaReporters on the condition of anonymity, said that numerous of servicemen have not received their allowances from the past three months. Nigerian soldiers are subjected to this treatment despite their efforts fighting Boko Haram at the frontlines.

The non-payment of their allowances has made life very difficult for many servicemen and servicewomen, interviews with soldiers revealed. One soldier complained that he needed to borrow a friend’s cell phone to call his family because non-payment of his allowance meant that he was unable to purchase or recharge it in Maiduguri, the Borno State capital and headquarters of Operation Lafiya Dole.

These servicemen told SaharaReporters that they did not want to report their superior officers but they had little choice now. They appealed to President Muhammadu Buhari to address their plight.

One source speaking to SaharaReporters said, ”our families have been complaining seriously about this hardship. Providing food for our family has become difficult.”

The soldier added, “I beg Defense Headquarters and Chief of Army Staff to urgently address our pending allowances so that we can give our best [in military service]. Morale has been low.”

A Staff Sargent from a different unit told our correspondent that the salaries of his servicemen were paid “but the allowances of more than 22,000 personnel has not been paid for three months.”

”Three months allowances has not been paid despite all our sacrifice for this country. I think we don’t deserve this at all. In Maiduguri alone we at least 22,700 personnel on payroll,” he said.

The Staff Sargent continued by saying, “even when they pay soldiers N45,000 they would deduct N15,000 for meals that were never given to us [by the military]. In fact, it is the State government that are providing meals so I don’t know why they are deducting our allowances.”

He concluded by saying, “President Buhari should help us investigate this matter because the [military officers above us] will not say the truth.”