Nigerians have set aside Tuesday, March 1st to boycott bank transactions and activities all over the country in order to protest excessive charges introduced by the Central Bank of Nigeria (CBN), which banks are using as an avenue to extort money from unsuspecting customers.

The boycott is being initiated by the Consumer Advocacy Foundation of Nigeria (CAFON) and the Coalition of Nigerian Consumer Protection Associations.

According to CAFON founder Sola Salako, the boycott is tagged as “No Banking Day” and is aimed to register Nigerians’ anger over outrageous charges on deposits, transfers and withdrawals. Ms. Salako is asking Nigerians to stay away from the banks on Tuesday and to shun any transactions either on the counter or online with any bank. 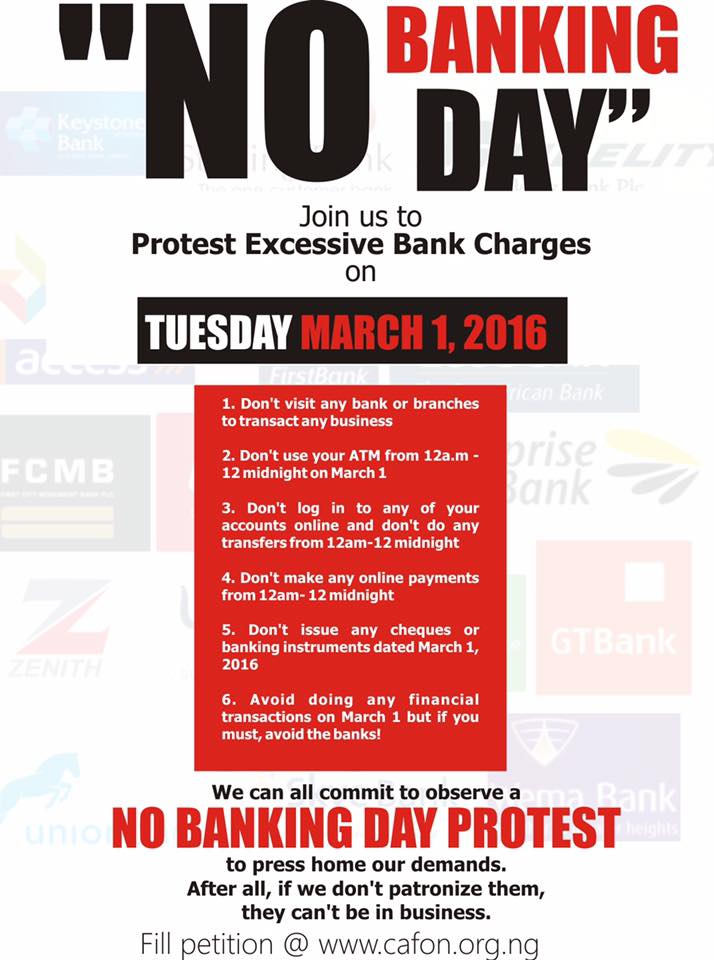 Ms. Salako then said that the CBN gave the directive with a caveat that those charges are negotiable but wondered why banks have refused to give the opportunity to customers to negotiate it.

“They just deduct money from our accounts because they have access to it. The charges may look small, but when you put them together they add up to a lot. So they sit there and declare huge profits at the end of the year,” she said.

Ms. Salako also noted that the banks have not contributed anything meaningful to the country’s economic quagmires and instead inflicted untold hardship on common people through their unethical practices.

The group described the charges as unacceptable, “what we are saying is the boycott will let us reduce their income for one day as a warning. If we don’t patronize them they won’t be in business. So respect us when we say this is not acceptable to us,” Ms. Salako said.

Ms. Salako disclosed that the boycott is the first phase of the protest and the group is planning to take to the streets to pressure the banks and relevant authorities to rescind their decision on the outrageous charges.

It will be recalled that public outcry has followed the introduction of the Current Account Maintenance fee by the CBN, saying that this amounts to legalizing illegality. Many customers have also complained about inconsistency of the stamp duty charges from the Commission on Turnover (COT).