Corruption seems to have fully regained its composure with every rustic arsenal currently being revamped and deployed by pro-corruption crack-team for a decisive counter onslaught. ‬‬‬‬

Taking the full advantage of executive ineptitude as well as its naivety that makes it seem incapable of winning high profile cases, pro-corruption team unabashedly and boldfacedly added to its arsenal with a recent book launch which brought to the public glare, virtually all the foot-soldiers and mercenaries of corruption without no iota of reservation. The news from Code of Conduct Tribunal about the highly celebrated and publicised case against Senate President Bukola Saraki leave not much to hope for.

The resolve of the pro-corruption team is further strengthened by the judicial collusion particularly, with humongous conspiracy from the NJC, typified by its incredible recall into the already battered judicial system, the Judges accused of corruption charges.

Then, one is quick to ask: where is the much-touted body language? It must have been decoded right? May God heal Buhari…,you probably pray? But this anti-corruption war is fatally sick and may not recover.

Consequently, the question on the lips of many is: ‘even if Mr Integrity is indisposed, don’t we still have an ‘incorruptible’ cleric who believes in the anti-corruption project in the saddle?’, they queried.

With the recent developments in the National Assembly, CCT, EFCC, DSS and the Judicial circles, one can alone conclude that the final nail has been hammered into the coffin of the President Muhammadu Bihari’s anti-corruption war. 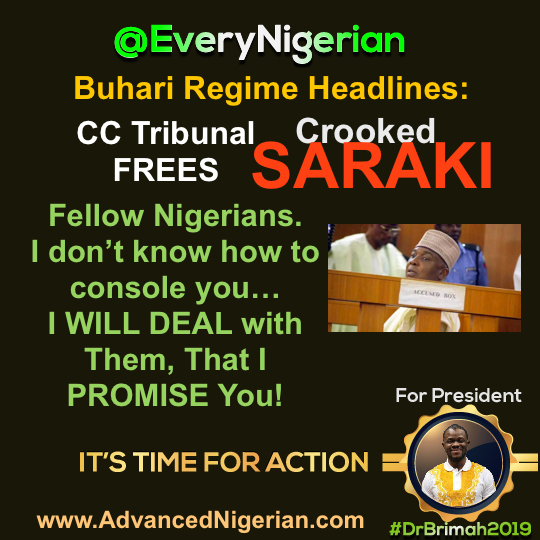 Indeed, corruption is not only fighting back, it is rather getting bolder and radiating with more confidence.

Without doubt, the battle line has truly been drawn and the unfolding drama will surely be a historic struggle to get the country out of its corruption-infested status. It is nevertheless apparent that no such feat in that direction will happen without a serious and strong fight; and of course, with a positive disposition to the anti-graft war, which must be supported by all well-intentioned Nigerians.

In October last year, a contingent of officers from the Department of State Security (DSS) raided the apartments of some highly-placed Judges and arrested two Justices of the Supreme Court along with others who were suspended on grounds of alleged involvement in acts of judicial corruption.

The arrests enjoyed wide media coverage and masses attention, with the belief that the anti-graft battle has got to an irreversible plane. Nigerians were however jolted with the news of the NJC’s recall of the Judges who were suspended from the bench, albeit, after much pressure and public outcry that greeted the discovery.

Of course, some were quick to judge the Presidency, blaming, the DSS and EFCC for supposedly overblowing an issue, which they have insisted, seemed like a media, rather than a legal trail.

Before his recall, an Abuja high court had hurriedly discharged and acquitted Ademola of the charges filed against him.

If the recall of Justice Adeniyi Ademola of the Federal High Court, Abuja who was suspended following the charges of corruption brought against him by the government was ‘justified’ others recall remain suspect and largely reprehensible.

Again, does the action of the NJC under the leadership of Chief Justice of Nigeria, CJN, Justice Walter Onnoghen deserve an applause? So far, he has only succeeded in charging only three of his men to court, after almost nine months of their arrest by the men of the DSS.

It will be recalled that the decision to suspend the alleged judges was predicated on the clause in the request of the Attorney-General of the Federation (AGF), Mr. Abubakar Malami, (SAN), which stated that the affected judges should be rested, pending the conclusion of investigations on the allegations against them.

However, if the EFCC, and DSS are unable to present a valid case in court after nine months, the Judge should resume duties till the AGF, and others are able to come up with compelling case against the accused in any competent court.

It is therefore very disturbing to discover that the DSS and the EFCC are finding it difficult to win cases in the court of law, just as they do on the pages of newspapers of late. the general perception is that these agencies probably need serious training or retraining in the area of intelligence gathering on investigations rather than publicity. Such development makes it quite implausible for an administration that rode to victory on the horseback of anti-corruption war to find it hard to get convictions if their energies and their resources are truly focused on intelligence gathering, information sharing and proper investigations.

What then is the essence of all the media hype. What is the whole essence breaking into the homes of Judges in the middle of the night and not being able to present credible evidence after nine months? And what then is the very essence of arresting and detaining before searching for evidences? It is simply Shameful!

Hence, the conclusion that: this is definitely not a case of corruption, fighting back, it is rather an anti-corruption team scoring cheap goals!

Perhaps, the Presidency needs to call the attention of the EFCC and the DSS to the fact that they are supposed to charge the accused to the law courts and not the people’s court. Imagine giving false hope to many of us who strongly believe in anti-corruption war and then not bringing any charge against them in a court of law!

As much as the recall of the alleged Judges may appear reprehensible, can we, in the spirit of justice and fairness, presume that NJC will refuse to recall them and let their issue hang indefinitely?

It is important for the FG to realise it will be a reckless mistake if the anti-corruption agencies eventually fail to present credible and convincing evidence to prove or win their cases.

The mistake of that night by the DSS, and those who hailed that Gestapo move has now come to the fore, and with the benefit of hindsight, the action would have been handled with more maturity and of course, with due process.

Whosoever believes in the principles of the Rule of Law and has experienced the cost of corruption on the nation and its citizens, will definitely wish that corrupt people rot in jail.

The fighters of corruption must, therefore, realise that corruption will certainly not only fight back, it is sure to record an easy win should the fail to win or lose any high profile case in court.

The team must acquire the requisite doggedness, fortitude and resources to carry out a deep investigation. It must similarly procure the needed war chest and assemble a formidable legal team with compelling evidence to the court of law, with a view to getting convictions at the end of the process.

Yes, the Senate did not confirm Magu on two occasions but were they not aided and abetted by the connivance of a segment of the same executive arm that nominated him.

Again, the deduction that can be made from the entire tragic-comedy is that the anti-corruption team is at best, not organised and at worst, have some corrupt elements within it.

Or else, how long do we continue to defend a team with a formidable experience and grounded exposure, but which still struggle to find its way and tactics to defeat corruption.

Except for the recent display of lack of tact and seriousness, it is essential to note that the anti-graft team with his past records has not really done badly, considering the fact that corruption itself, in addition to monumental capacity to fight back, is well-experienced and highly organised with large war-chest and massive resources at its disposal.

Apart from discountenancing the laughable High Court judgement that went the way of Justice Ademola, AGF, EFCC, and DSS should live up to their billings and launch a crucial appeal at a superior court with a view to earnestly redeem their image.

Since it is assumed that the game is a ceaseless one, there is a compelling need for the anti-corruption team to maintain a dogged but scrupulous battle to avoid needless loss of concentration due to distractions from the center referee and impatient spectators.