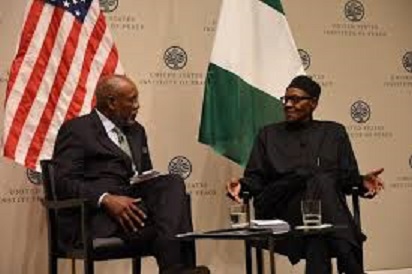 The Presidency on Wednesday said President Muhammadu Buhari and his entourage spent less than 10 percent of the N2.2 billion claimed by an Abuja-based newspaper, Nigeria Pilot, to have been expended on the recent trip to the United States.

The newspaper had in its recent editorial estimated the total cost of the trip at N2.2 billion.

Presidency insiders told PREMIUM TIMES the trip did not cost the nation more than N61 million, excluding the fueling of the presidential fleet.

A statement by the Senior Special Assistant to the President on Media and Publicity, Garba Shehu, said contrary to the newspaper’s assertion, the total cost of the trip to the Nigerian taxpayer was at the most minimal, in line with the policy of this administration to cut waste and extravagance.

“In point of fact, the total amount expended on the trip by the Office of the President amounted to nothing near ten per cent of the speculated figure,” the statement said.

The Presidency said it is very sad that in this age of free-flowing information and in this era of change, a media organisation would make itself available as a vehicle to peddle a lie of such low and ignominious quality.

It stated that owing to the free accommodation provided by the host government, all the personal staff who accompanied the president on the trip received reduced allowances.

It also said that Mr. Buhari’s son, Yusuf, who was on the trip, received neither allowances nor estacode while the five governors on the trip each paid their own way.

The Presidency also explained that the permanent secretaries who travelled on the delegation did so in accordance with extant rules and none of them exceeded their estacode entitlements.

“Apart from the Nigerian Pilot’s mischievous mathematics, it is short-sighted and misleading of the newspaper to have claimed that President Buhari’s trip to the U.S. achieved nothing,” the statement said.

The statement said Nigerian-US relations had suffered severely over past few years, adding “That relationship has now been reset. The benefits of this symbiotic relationship will become more and more evident as the Buhari administration continues to tackle the challenges of corruption security and the economy.”

On the benefits of the US trip, the Presidency said it includes the proposed $2.1 billion fund from the World Bank for the re-development of the northeast battered by Boko Haram; $5 billion from US investors in Nigeria’s agriculture sector; $1.5 billion investment in the Nigerian health sector; and another $5 billion investment from the U.S. in our country’s power sector.

It stressed, “Also, as things stand at the moment, the embargo on the sale of weapons sales to Nigeria is in the process of being removed.

“The trip to the U.S by President Buhari was definitely very successful and beneficial to Nigeria.

“Only those rabidly determined to find faults unnecessarily will cook up falsehood in a futile effort to rake up murk where none exists.”