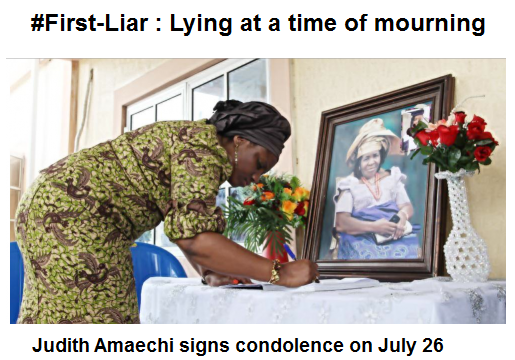 NewsRescue– New images of Rivers state governor Amaechi’s wife actually at the “shrine” and signing the condolence register of the late president’s mother, have sadly proven that the First-lady of Nigeria, Patience Jonathan, among any other things is a liar. Demonstrating the danger and relentlessness, regardless of time or trial, of Nigerian political class, the wicked and destabilizing lies she was caught broadcasting occurred at a time of death of her foster mother when she could be expected to be more withdrawn. This spurring the hashtag: #First-Liar.

“It should be noted that while several groups and individuals from across the country came to condole the first lady and Mr. President on the death of her mother, no official of Rivers state government deemed it fit to pay the first family condolence visit, yet they claimed the first lady is a daughter of Rivers state,” Mrs. Jonathan had said.

“He who must go to equity must go with clean hands. They should learn to give respect to those who deserve respect so that they too can earn respect,” she had added. 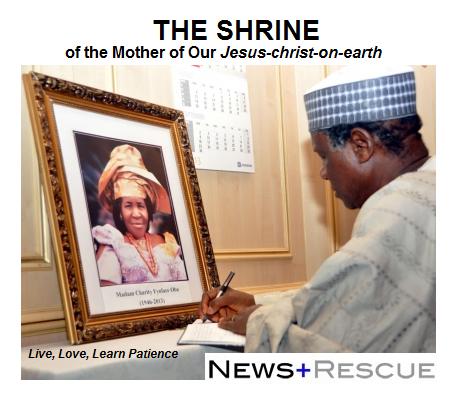 PREMIUM TIMES findings show that Rivers State government not only condoled with the First Lady; Judith Amaechi, wife of Rotimi Amaechi, the Rivers State Governor, was accompanied by Mr. Ikuru and other state government functionaries to a condolence visit to Mrs. Jonathan on July 26.

The Rivers State delegation had, earlier on that day, received Mrs. Jonathan at the Port Harcourt International Airport, Omagwa.

Several photographs of Mrs. Amaechi signing the condolence register at the King Perekule’s residence of the late Mrs. Oba were published by various newspapers.

During the condolence visit, Mrs. Amaechi signed the register placed before a framed portrait of Mrs. Oba and a photograph of Favour, her grandchild, who also died in the accident.

One week after Mrs. Jonathan’s loss, Mr. Amaechi issued a condolence statement over Mrs. Oba’s demise saying that he received the news with “utmost shock and sadness.”

“No doubt the demise of a loved one leaves us feeling hollow and alone. Yet, in the midst of our pain, we must not forget that we are Christians and therefore should not mourn like those without hope,” the Rivers governor had said.

The First Lady had reportedly snubbed Mr. Ikuru, who had gone to welcome her on Sunday, at the Port Harcourt International Airport, Omagwa.

Mrs. Jonathan’s security aides prevented Mr. Ikuru and other Rivers State government officials from getting near the First Lady.

Mrs. Jonathan justified her actions in her statement, late Monday, saying that no official of her home state came to commiserate with her family in their time of loss.

A letter to the First-lady and her fans by a certain Nasir that is going viral on the net, called her out for the blackmail against the persons of the Governor and his wife:

Nasir Responds to “Amaechi and his Wife Refused to Pay Homage, Cry by First-lady Patience”

May I seize this opportunity to call to order her excellency, dame Patience as many dunces call her and her like for being the wife of their Oga, a honor she and her ilk do not in the faintest deserve. But perhaps better than some who even call her “Jesus Christ on earth.”

Now may I point out to her “excellency” and her supporters the distressing fact that neither she nor her husband paid a condolence visit to the widows of those security men that were killed and brutalized by Ombatse cult in Nasarawa state, nor did they visit the families of those that lost their lives/limbs in the 2011 post election violence of which most of the victims were innocents killed by her supporters. And when and how many visits have the first family paid to the thousands of victims of terror in the lackadaisically governed Nigeria?

But despite the mourning and sorrowful state you should be in with the loss of your lovely mom and more so, with the fortune of the uncountable number of people and groups of your subjects from different parts of this great country of ours who tumbled over themselves to visit you and observe condolence to your “holiness,” your eyes, ears and mind were on that innocent governor of Rivers state and his wife for not visiting you.

The question here is; is it by force to visit you or he must abandon what he was duly elected for to visit you?

Someone should tell Madam Patience that it wasn’t Amaechi that took the life of her mom on the dangerous roads of Nigeria, and his condolence will not in anyway bring her back.

Please let this acclaimed son of yours, that you gave birth to when you were 7 yrs old be among those to have the fresh air that your husband assured Nigerians during his 2011 campaign.

May the spirit of your mom rest in peace.