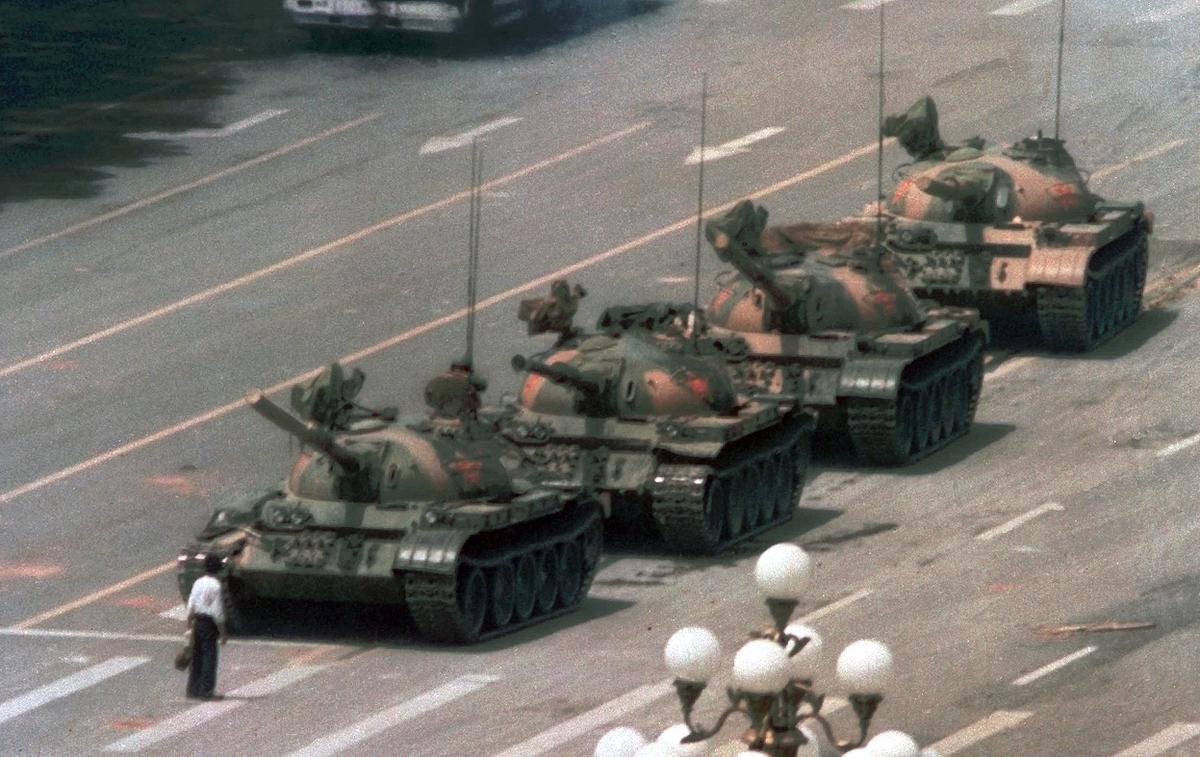 During student-led protests in 1989 China, civilians had attempted to block the military’s advance towards Tiananmen square in the heart of Beijing where the students had holed-up in protests after the death of the nation’s Premiere.

The Chinese Deng Xiaoping-led government in a crackdown from June 3rd to the 4th, drove their tanks over and used their assault rifles to mow down the civilian barricade. Hundreds to thousands were massacred.

An image of one Chinese man standing in front of a tank at Cangan Boulevard preserved the memories of the massacre.

In a clamp down on the Shia Muslim religious minority in Nigeria’s north, a rather eerily similar massacre occurred in Nigeria between December 12th and 13th of the ending of 2015.

Also led by mostly students of the ABU college, the civilian protesters had gathered to block the army from advancing towards their Islamic Center after the Army had earlier in the day, strangely deployed combat troops to the front of the building.

Fearing the army was planning another massacre of the faithfuls, fresh off the memory of an unaddressed massacre last year July in which 30 unarmed civilians and three sons of the nation’s Shia leader, Sheikh Zakzaky, protesting the Israeli occupation were extrajudicially killed by the army during a civil protest; the youth carried sticks and stones and dared the military Chief’s soldiers to kill them right there, while demanding to speak directly with the Chief of Army or higher authorities.

“Why did you deploy soldiers to our doorstep without warning,” they demanded from the army command. “You may as well kill us right here, it won’t be the first time after all.”

Dozens were gunned down on Sokoto road to make way for the vehicles to pass. But the Military did not stop there.

They proceeded to the Islamic Center and killed everyone in sight, throwing grenades into the complex as though battling a major military enemy.

The army followed up the massacre, deploying bulldozers to raze down the center.

As the Shiaphobic world looked away, the army had not yet finished but at 11pm on the night of the 12th and into the morning of the 13th, Nigerian troops were again deployed to renowned pro-peace, inter-faith dialogue Shia leader Zakzaky’s house.

Recognizing the ominous signs of a full blown Shia massacre, text messages had been sent out to all available faithfuls to gather and defend their religious freedoms. As youth trooped to the home-under siege, the army fired at them without restraint of a flinch of hesitation.

By the time the human shields had been crushed, hundreds of dead bodies lay strewn within and around the premises of the residential building. The Boko Haram drilled Nigerian army had employed all its arsenal including tossing grenades into the building which they set ablaze in attempt to kill the leader. They succeeded in killing three more of his sons and are believed to have also killed his wife among the hundreds of other dead.

When the army went in to search, they found the Sheikh had survived, hidden in a bunker of sorts. He had sustained as many as four gun shot wounds, but this did not stop the army from smashing his eyes with the butt of their guns and dragging him out by his legs. Later on a wheel barrow, they whisked him away to detention.

At least 172 bodies were deposited at the ABU hospital at first count. Dozens of bodies lay on the streets, left to be violated by destitute and shameless thieves. The death toll is estimated to be as many as a thousand from the Zaria massacre and it appears the army is not done with the Shia sect in Nigeria and West Africa’s capital yet as the next weekend, bulldozers returned to plough down what was left of the Husainiyyah Shia Muslim’s Islamic Center.

The face of Zakzaky’s 13 year-old murdered son, Humaid, remained to implant the memory.