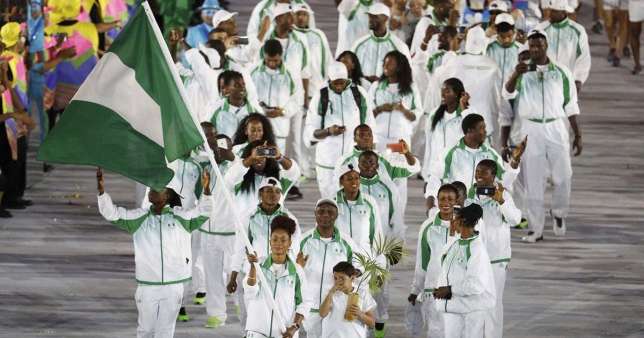 Nigeria made one of the worst outfitted appearances at the commencement of the Rio 2016 Olympics. Allegedly apart from the contestants being stranded and having to buy their own tickets, the outfits were “late to arrive” and the Nigerian contingency had to wear tracksuits! Imagine that!

Compare to other teams:

And then see Nigeria in tracksuits!

Where did Buhari get Solomon Dalong from for God sake? You might think that Buhari selecting a 51 year old man who is no longer a youth to be minister of youth, might have been a game plan, because he has achieved some wisdom with age…obviously not. This was a most pathetic cabinet selection for Nigeria among others.

Dalong disgraced himself further with this viral video of his apology to the stranded Nigerian under 23 contingency. Try not to cry:

These are the clowns that are ministers under Buhari, hear Solomon Dalung disgracing Nigeria as usual pic.twitter.com/HPCnMS7aBy

I gotta admit that my favorite part of the Olympics is the opening ceremony. All the pomp and circumstance, but especially the march of nations. I love it because it humbles me, reminding me that I don’t know shit about geography, as I go “WHO?” at most of the countries named. And then I consult Dr. Google to learn more about the countries I didn’t even know existed. But most of all, I love seeing the athletes’ outfits. This is the time for countries to teach us a bit about some of the cultural markers they hold dear.

For my homeland of Nigeria, I was really excited to see what we would come out with. At London’s 2012 Olympics, we showed up and showed out, with the women in geles and the men in dashikis that had green embroidery. I remember being at home squealing because the Green White Green came correct! We came through, y’all. The geles were tied properly too. The up and downs on the women looked so good. I was beaming with pride.

So I just knew that for the 2016 Rio Olympics, we would come to stunt. I just knew Naija would represent correctly. So when Team Nigeria walked out wearing green and white track suits, my spirit hit a *wall slide* and I cussed. WHAT IS THIS BOOLSHEET? We’re just gonna wear regular tracksuits on this grand stage when we coulda been out here doing the most with the most AND NO ONE BLAMES US? All the shakara we like to do and we were at the 2016 Rio Olympics rocking ordinary shirt and pants.

And then I found out why they were in these. Turns out that the alphets (mmhmm) they were supposed to wear weren’t ready on time, and that is why they had to look basic during the march of nations.

Nigeria, lemme get this straight. We had FOUR YEARS to prepare for this event and our clothes weren’t ready in time. It’s not like the Olympics snuck up on us.

This is what we get for messing with Naija tailors sometimes. You know when you give your seamstress your fabric and tell her you’ll come pick them up in a month for the wedding you’re going to. Well, you call in to remind her and she tells you she’s almost done. And then the day of, you show up to pick up your clothes and she just started sewing it, so you sit there for 6 hours, watching her complete it, fuming, but stuck because you have to have THAT outfit, since the fabric is what everyone else will be wearing (aso ebi).

You swear you will not be going back to her again but the clothes she makes for you fit you so well so you will have this deja vu moment at least 3 more times before you’re finally fed up and cuss her out one good time and find another tailor.

Thank God I’ve been delivered from such foolery. My seamstress now? She is the REAL MVP. I show up when I say I will and my clothes are ALWAYS ready and folded up nicely for me to try on and take with me. Shoutout to Olivia Ogbara of Dressmaker by Olivia.

This must have happened to this entire team. They told some useless tailor who ain’t got no respect for time to have these FINISHED by July 30 because they had to get to Rio by July 31 and they all showed up and the tailor was still working on their hats and hadn’t touched the actual clothes. They shoulda told them they needed these in May, so they could be ready by July.

But then, I found out the outfits that Team Nigeria was supposed to wear for the opening ceremony and I realized that maybe someone MADE SURE they weren’t ready in time to save them all from embarrassment.

JESUS IS LORD. WHAT IS THIS???

No, seriously. WHAT ARE THESE ENSEMBLES AND WHY ARE THEY A THING? Why were they going to have Team Nigeria looking like they were gonna be going to the TriWizard Tournaments, where they will compete against Slytherin and Gryffindor in a series of contests? Who told them that Cersei Lannister’s Sunday best was part of Nigerian culture? Why were the men channeling Peter Pan?

I have way too many questions. These crushed velvet robes are the clothes of which tribe? I need to know. Which heritage clothes is this one? Because it surely ain’t from the Big 3 (Yoruba, Igbo and Hausa). HEP ME ASK DEM WHICH PART OF NAIJA THESE ROBES ARE FROM!

I feel like the person who designed these just came back from “abroad” and he wanted to show how “learned” he is by having them look “regal” when really, he just has them looking like characters from a fantasy novel. Olodo. The outfits they were supposed to wear are like those Naija cousins we all have who go to London for 2 weeks and come back speaking with British accents. ABEG GERRARAHERE. The entire team must have fasted for 7 days in order to not have to wear the abomination they were uniformed for. So the tracksuits? They were basic but they weren’t humiliating.

I don’t even blame the athletes for the outfit snafu. Their jobs were to show up, and they should have been provided with what they needed before they got to Rio. Who was in charge? How many balls were dropped?

The Nigerian soccer team almost didn’t make it to their first matching, getting stuck in Atlanta. Delta Airlines had to save them and they made it to Rio only six hours before they had to play.

My people, my people. We gon do better, Fatha Gawd! We carried last on this one.