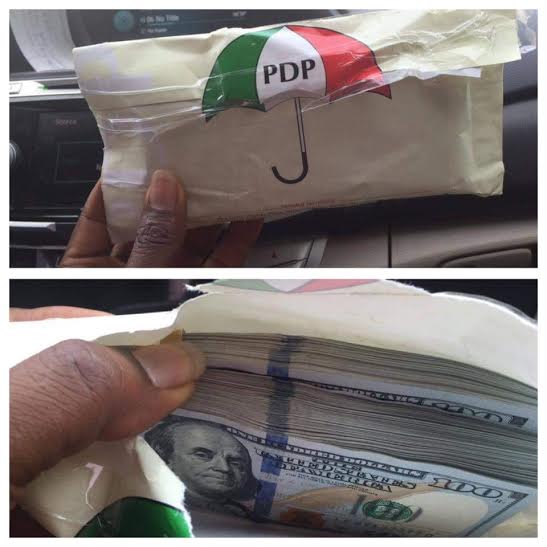 A disaffected insider within President Goodluck Jonathan’s administration as well as several banking executives have told Sahara Reporters that Nigeria faces a deep economic crisis and massive social gloom after the 2015 general elections. Speaking from differently, the sources said President Jonathan had virtually vacuumed the Nigerian treasury to serve his re-election campaign, leaving Nigerian banks in dire straits and many states on the verge of failing to pay salaries this month.

“The truth is that Mr. President has almost emptied the treasury, and some of us close to him are even beginning to get worried about what will happen after the election,” said the political insider.

The bankers echoed the sentiment. “The reason the Naira has taken such a dramatic plunge over the last three or so months is that politicians moped up the hard currency for elections,” said one banker. “I have never seen anything on this scale, where politicians snatch up every hard currency in sight, whether dollar, Euro or pound sterling,” he added.

Asked who is responsible for the situation, the banker said he would not engage in partisanship. “All I know is that this country is now in a frightening economic position — and all these politicians running up and down to retain or take power have created the situation,” he asserted.But another banker was not shy in pointing a finger at Mr. Jonathan. “The president has been indifferent to the economic crisis caused by the ongoing campaigns. And the reason he is indifferent is that he is the major culprit,” said the executive. He added that the distribution of largesse by Mr. Jonathan had now become “one of the few lucrative businesses in Nigeria.”The bankers said massive layoffs were inevitable in the banking and other sectors of the Nigerian economy. They said numerous companies that depended on imported machinery or other components sourced from abroad were bleeding cash. “Many Nigerian companies are experiencing severe cash flow problems. Many of them are defaulting on long and short-term loan repayments. So the banks are suffering heavily as well,” one banker told SaharaReporters.Two of the bankers disclosed that the banking industry would have laid off thousands of workers, but that officials of the Jonathan administration pressured them to wait until after the elections. “It will take a long time before banks recover from the current shocks in the system. There’s no bank strong enough not to retrench staff,” one said.

The stress in the banking sector, with the prospective job losses, will be compounded by massive retrenchment in the civil service at the Federal and state levels, one source predicted. Our source inside the Presidency revealed that Mr. Jonathan plans to follow former President Olusegun Obasanjo’s style by removing fuel subsidies as one of his first economic acts. “The truth is that it’s a must that fuel subsidy has to go because the money is not there to continue [paying for] them,” he said.

As part of an arrangement to receive slush funds from oil marketers, Mr. Jonathan and Ms. Alison-Madueke allowed numerous marketers to make fraudulent claims and get paid for importation they never made. That criminal collusion has put Nigeria in a situation where the oil marketers are being owed N450 billion. “Nigeria will have to deal with this and other debts from fraudulently inflated invoices once the elections are over,” one banker said.

The scam also helped create a recent fuel scarcity in the country. As the fuel situation threatened to become a politically costly crisis, Mr. Jonathan asked the oil marketers to offload fuel they had been “round-tripping” in order to collect unearned subsidy payments.

Bankers agreed that the government would find it extremely difficult to pay that debt after the election without rolling back or eliminating subsidies altogether. In recent months, oil marketers as well as operators of the privatized power sector received massive financial handouts from the Jonathan administration. In turn, they donated billions of naira to Mr. Jonathan’s re-election campaign.

President Jonathan has gone on a dollar-spraying spree since the general elections were postponed by six weeks. Our sources disclosed that the president had doled out more than $200 million, using generous cash gifts to entice various traditional rulers, politicians and activists, especially those in the southwest and parts of the north, to endorse him.

Several sources said much of the president’s campaign cash is from shady oil deals brokered by Petroleum Minister Diezani Alison-Madueke. The massive theft of Nigeria’s crude oil remains an open scandal, and one of the richest sources of funds for the campaigns. Last September, Al Jazeera reported that the theft of Nigeria’s crude oil was at its highest rate in years, adding that several hundred thousand barrels of crude are stolen each day.

The continuing crisis of crude oil thefts has persisted despite the Jonathan administration’s security contract to Global West Specialist Agency, a company owned by Government Ekpemukpolo (popularly called Tompolo). The contract to Mr. Tompolo’s company was for the supply of 20 patrol vessels to enable Nigeria’s military authorities to better secure the coastline and stem oil theft. Mr. Tompolo’s firm was also engaged as a consultant to prevent crude oil heists.

The latest rating firm of Standard & Poors said that the Nigerian economy faced a clear and present danger. Nigeria’s external reserves have been significantly depleted in the past year, said a banker, adding that many state governments were already looking for loans to pay workers’ salaries.