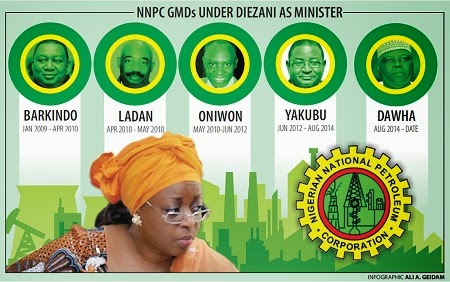 The forensic audit conducted by Price WaterhouseCoopers, PWC, on NNPC to ascertain the veracity of the alleged missing $20 billion from the Federation account is generating furore and counter claims among stakeholders. PWC had qualified the audit saying it did not obtain needed information from NPDC a subsidiary of NNPC.

The qualification of the audit report has cast doubt on the reliability of the report. A source who has a working knowledge of the audit report at PriceWaterhouse told Vanguard that what the auditors did was a review and not a forensic audit. He said “It is not an auditing job.

It is a review of what has happened and you are expected to present a report. The qualification in the audit report is a normal qualification. When you are given a job there are procedures for doing the job based on agreement with the client.

So you want to put a caveat so that others would not use  it or rely on it for decision making. It is also to protect the company from any legal  action that may arise from the job.”

President Institute of Chartered Accountants of Nigeria, ICAN, Mr. Chidi Onyeukwu Ajaegbu (FCA) toldVanguard that an account is qualified when the auditors do not agree with the auditee on some issues. He said there are two levels of qualifying an account: modification and actual qualification.

He said the qualification could be expressed on strong terms or mild terms, adding that a qualified account calls for further instigation. Ajaegbu said the NNPC case is that of material qualification where a unit being audited did not provide the needed material substance.

He said the reason given by PWC was enough to qualify the account, adding that auditors qualify accounts to shield themselves from blame by potential users of the account when they discovered some misstatement or representation in the account.