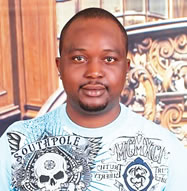 Nollywood actor, Augustine Okoye, has cried out to homosexuals in the country to let him be in a statement released online. The actor who explained that he only played a gay role in a Nollywood movie just to prove a point that he could act any role, says he has been having sleepless nights because of the role..

“For the fact that I recently played a role in a gay movie does not make me one. I am straight, I took the role because I want to prove to directors and producers that I can take any role and give my best in it . Please, gay should stop harassing me because I am not a gay,” he begged.