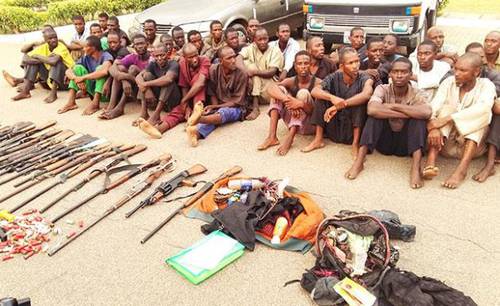 Note: we have no confirmation when this video was released, it may be fresh or over a year old. We have been unable to find evidence of this video in internet archives over 5 days ago. However regardless of the time, it shows the depth and severity of the nomadic terror threat in Nigeria.

A horrendous video in which Fulani herdsmen claim that they are supported and protected by the government of President Muhammadu Buhari has emerged.

In the video, one of the members is heard saying that the group in “everywhere in Nigeria”.

Watch the 6.37 minute video below.

Some translated content on the video is as follows:

“We are Fulani herdsmen declaring war against any tribe, be it Hausa or any tribe that has being subduing us. We are everywhere in Nigeria… Zamfara, Sokoto, Katsina, Niger, Kano, Kwara, Oyo, Anambra, Kebbi. Our mission is to destroy souls and claim their properties, especially those of the Hausas and other minority tribes that have ganged up against us to steal our cows.

“We will spill [the] blood of everyone in any community that kills one Fulani man. We are armed to the teeth and ever battle ready for any security agencies, if at all there is, because we have brothers in government circles. We have, on our side, top ranking officers, emirs, and what have you on our side and they are always willing to divulge secrets to us.

“Our people are in the military, the police, the secret police [Department of State Security Services], and many more.”

The video came out a few days after over 20 people were killed on Monday in the Ukpabi Nimbo community in Enugu State.

Reports indicated that over 100 armed cattle rearers stormed the community, killing indiscriminately and razing buildings in the process.

Prior to the attack, the herdsmen had been recruiting gunmen from Nasarawa in preparation for the deadly ambush.

Many of the villagers escaped to the nearby Uzo-Uwani area, where many of the natives in the community are fearing for their safety in light of more attacks.

The villagers said they were abandoned even after they alerted security agencies to the plan to attack them.

#FreeZakzaky For Us To Appear Before Judicial ...