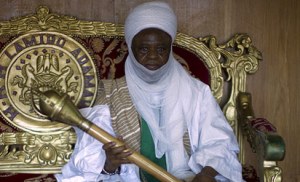 Lamido of Adamawa and one of the delegates to the ongoing National Conference Alhaji Muhammad Amiyu Musa has said that his recent proposition for the oil-producing states to retain the entire oil revenues is backed by non-oil states across different parts of the country.

He said other states that do not produce oil in the country would generate their revenues from their lands and other physical structures’ utilisation, through tax collection avenues from any beneficiary, including the federal government.
Asked whether this was his own personal opinion or representing the affected states, the emir replied that “this stance is shared by all the states without oil. If some people don’t want others to benefit from their own natural resources, let them hold onto their own, we also hold what we have as natural resources.
“But most of the people in the conference are government’s allies. They are in support of my stance but only that they don’t want the Press to report them, since it won’t be a welcomed idea by the government. They actually support this position.”
The Lamido also defended his recent comments in regards to the Adamawa emirate’s fallback position of relocating to Cameroon, should Nigeria’s challenges lead to its eventual split.
He was speaking to BBC Hausa Service at the weekend even as he insisted on his position that the people of his emirate and Northerners were not afraid of Nigeria’s break up.
“We have been convened from all parts of Nigeria to discuss and deliberate on how Nigeria can overcome its challenges and develop. But for the first three days of the conference, I observed how other people were arrogantly talking, referring to northerners as praise singers and beggars,” the Lamido explained.
He added that since his emirate “belongs to three different countries of Nigeria, Cameroon and (Republic of) Chad, where me and my people would live peacefully, those who are shouting in this conference would not have anywhere to go.
“When you always tell truth, they tag you as controversial. But I must tell what is reality to protect the interest of my people and guard their dignity.”
The royal father however said “we all work towards national unity; despite that they continue to think their oil money must belong to them. That is why I said they retain their oil revenue 100% and the rest of the non-oil states, including those in the south-east and west retains whatever that is on the land, including in Abuja.”
While rejecting any benefit out of the oil money by northern states, the Lamido described what his Adamawa state get monthly to have been far less than what its counterpart in the south-south received in a month.
“What one state gets in a month, will take 100 years for states like Adamawa to receive. What do we benefit here? Northerners, if not for their levity, could exploit the numerous farming potentials to rely on, as did many developed countries of Germany, Japan and China.”
The emir, who said he represents traditional rulers in the ongoing national conference, also delved into the constitutional roles of the traditional rulers.
“I am representing traditional rulers. They send me here. Whatever I said is with their consent. We don’t need our roles in the constitution. As an emir, the roles I am discharging exceed 100, ranging from trials, making laws and even social welfare responsibilities.
“What we actually demand is for the federal government to recognise us by inserting Council of Traditional Rulers in the constitution, which would comprise three emirs from the senatorial zones of each state. But I don’t mean recently-established emirates, but those of the past 1000 to 300 years old,” he said.