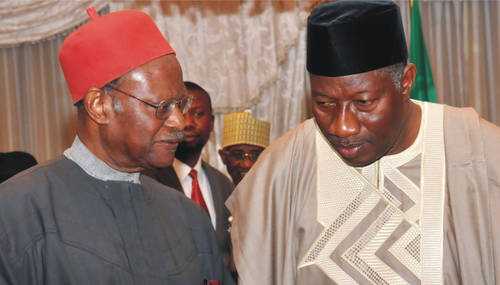 A Panic-stricken former President Goodluck Jonathan has sent former Commonwealth Secretary General, Emeka Anyaoku, to plead with President Muhammadu Buhari not to launch an official probe of his administration.

Several sources in Abuja, including aides of President Buhari, briefed SaharaReporters exclusively about former President Jonathan’s dispatch of Mr. Anyaoku as an emissary to his successor.

One of our sources said Mr. Jonathan moved quickly to send powerful intercessors to the Presidency after the Buhari administration began to question massive last-minute withdrawals and disappearance of more than $20 billion in government funds orchestrated by former President Jonathan as well as his closest ministers and aides.

One source familiar with Mr. Anyaoku’s desperate mission to President Buhari revealed that the former Commonwealth chief executive urged the new president to remember that Mr. Jonathan voluntarily decided not to contest the results of the March 28, 2015 presidential election, won by Mr. Buhari, on the understanding that he and his administration would not be subjected to a probe.

Our sources disclosed that Mr. Anyaoku spent a little more than two hours in a close-door meeting yesterday where he sought to prevail on President Buhari to halt the ongoing probe of what happened to billions of public funds during the last few months of the Jonathan government.

Before imploring Mr. Anyaoku to plead with President Buhari, Mr. Jonathan had also asked former military head of state, Abdulsalam Abubakar, to speak to the current president and suggest a suspension of all ongoing probes. Mr. Buhari has put in place several investigative committees to probe the illicit withdrawal and disbursement of public funds by the Jonathan administration. The presidential committees are charged with advising the administration on strategies for retrieving any public assets stolen by officials and cohorts of the Jonathan Presidency.

One of the committees has already discovered that Mr. Jonathan and some members of his cabinet apparently colluded in the dying days of the previous government to loot billions of dollars. The funds were looted via the Central Bank of Nigeria, the Nigerian National Petroleum Corporation (NNPC), the Ministry of Finance, the Nigerian Maritime Authority, the Federal Capital Territory, and several other departments. A source within the investigative committee revealed that Mr. Jonathan and his closest aides and political appointees made illegal withdrawals of funds to finance his failed bid for re-election.

Former Minister of Finance, Ngozi Okonjo-Iweala, has stated that former President Jonathan asked her to withdraw more than $1.2 billion from the excess crude account. Even though Mrs. Okonji-Iweala continues to maintain publicly that she did nothing wrong during her tenure, a source told SaharaReporters that the former minister, who coordinated economic affairs during the former president’s tenure, has been quietly cooperative with the Buhari administration. According to the source, Mrs. Okonjo-Iweala has offered what amounts to a dossier of corrupt deals authorized by the former president.

In an attempt to curry favor with the new government, Mrs. Okonjo-Iweala recently directed officials of her polling agency, NOI Polls, to give President Buhari a 70% approval rating among Nigerians. “The polling results were simply cooked up,” a professional pollster told SaharaReporters. Prior to the 2015 general elections, the former minister’s fake polling organization kept repeating that Mr. Jonathan approval rating was  up even as his political fortune plummeted.

. @Omojuwa Thank you so much for your time with us this week and also the surprise lively visit last month pic.twitter.com/Dqa6RAkiKi

SaharaReporters also learned that former Minister of Petroleum Resources, Diezani Alison-Madueke, is also actively cooperating with the Buhari administration. As earlier revealed by us, Mrs. Alison-Madueke had struck a deal with the new government to submit a document to the Economic and Financial Crimes Commission (EFCC) exposing her collaborators at the NNPC. The former Petroleum minister, who was one of the closest cabinet members to Mr. Jonathan—and the mastermind of numerous money laundering deals on behalf of the former president—currently shuttles between the UK and Switzerland. A source close to Mrs. Alison-Madueke said the former minister was receiving treatment in the UK related to breast cancer.

After emerging from his marathon meeting with Mr. Buhari yesterday, Mr. Anyaoku claimed that he had visited to offer “advice” to the president regarding his forthcoming official trip to the US. Mr. Buhari is scheduled to start his US trip on Sunday.

A source at the Presidency told SaharaReporters that Mr. Anyaoku had misrepresented the purpose of his visit. “The elder statesman [Anyaoku] did not come to advise Mr. President about the trip to the US. The plans for the trip were already concluded a while ago, with all logistics and programming support,” the source added.

Former President Jonathan is currently in Abuja where he remains in constant touch with Abdulsalam Abubakar and other political players to prevail on President Buhari to halt the probe of his administration.

One source at the Presidency revealed that Mr. Buhari was not receptive to Mr. Anyaoku’s pleas. According to the source, the president told the former Commonwealth chief executive that the massive theft of funds by officials of the previous administration had robbed him of funds to start meeting his promises to the Nigerian people. “The president’s concern is for everybody who stole funds, including the former president, to disclose their willingness to return their loot to the Nigerian people,” the source added.