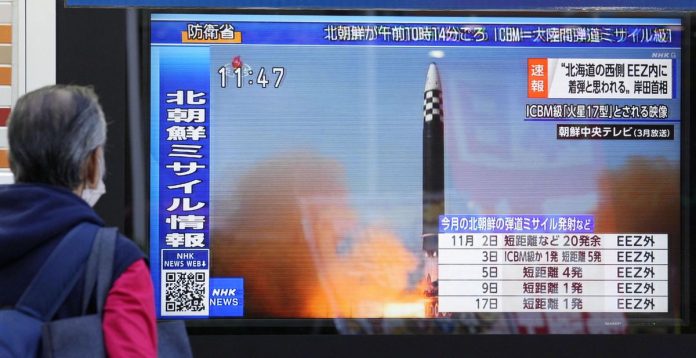 North Korea test-fired an intercontinental ballistic missile (ICBM) on Friday November 18, that Japanese officials claim had sufficient range to reach the mainland of the United States and that landed just 200 kilometres (130 miles) off Japan.

The launch, reported by both South Korean and Japanese officials, comes a day after a smaller missile launch by the North and its warning of “fiercer military responses” if the U.S. boosts its security presence in Asia.

U.S. Vice President, Kamala Harris and leaders of Japan, South Korea, Canada, Australia and New Zealand condemned the launch at an emergency meeting called on the sidelines of the Asia-Pacific Economic Cooperation (APEC) summit on Friday.

“We strongly condemn these actions and we again call for North Korea to stop further unlawful, destabilising acts,” Harris said during the meeting, convened to discuss the launch.

The South Korean military said that, in response to Friday’s launch, South Korean F-35A fighters and U.S. F-16 jets flew in formation off the east coast of the Korean Peninsula and conducted a firing drill against targets that simulated North Korea’s mobile missile launchers.

Friday’s launch adds to a record-breaking year for North Korea’s missile programme, after it resumed testing ICBMs for the first time since 2017 and broke its self-imposed moratorium on long-range launches as denuclearisation talks stalled.