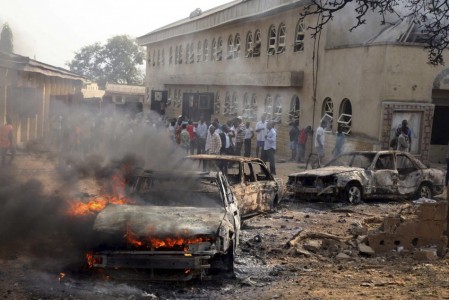 Governors of the nineteen northern states in Nigeria under the aegis of Northern States Governors Forum, NSGF, said all of them are in trouble following the endemic insecurity that has bedeviled the region since 2009.

The governors spoke on Thursday in Abuja during the submission of a report by the committee on reconciliation, healing and security, which was formed by the Forum on July 26, 2012.

“we governors are in trouble, because we took the Quran or the Bible and swore oath of office and allegiance to two things; protecting lives and property.”

“So if any soul is killed outside the rule of law; Allah will ask you on the day you enter your grave. So how many of us here are going to escape?” he asked the gathering.

The Bauchi Governor also reminded his colleagues that they had all sworn to protect the constitution of the Federal Republic of Nigeria.

“We have sworn to protect the constitution, both the import and the contents. So these are the few things I want to remind us, so we are in trouble,” he said.

Related: NewsRescue- Not Condemning Boko, But Begging for Amnesty: Should Nigeria’s Northern Leaders Be Fired?

Speaking in a similar vein, the Governor Murtala Nyako of Adamawa said the governors had resolved to be “very very serious about restoring security” in the North.

He also identified twenty one ‘items’ to buttress the fact that the governors are in trouble.

He listed items he described as the “manifestation of insecurity perpetuated by bands of marauders motivated by their desire for money other than ideological goals.”

Others, he said, are illegal bunkering, violent crimes, assassinations, extra judicial killings, maiming of individuals by law enforcing agents, especially the JTF, as well as clashes between herdsmen and farmers.

Mr. Nyako also identified advanced fee fraud, otherwise known as 419, rape, sale of human organs, human trafficking, and child kidnapping for ritual purposes by highly placed individuals, whom he said, “ instead of being grateful to God, they are looking for more powers.”

Related: NewsRescue–Every Nigerian Do Something! ENDS Launched in Nigeria

The Adamawa governor said all the identified elements of insecurity must be stopped, as a pre-requisite for public security.

Earlier, the chairman of the reconciliation committee, Zakari Ibrahim, said after its inauguration, the committee requested for, and received 140 memoranda, reports, White Papers, and position papers from most of the 19 northern states.

Mr. Zakari said less than 20 per cent of the memoranda came from individuals, while the majority was from organized groups and institutions. He added that the committee met with the National Security Adviser, NSA; the Director General of the State Security Service, SSS; the Sultan of Sokoto, Sa’ad Abubakar; as well as the Catholic Archbishop of Abuja, John Onaiyekan.

He said the committee visited six flash point states of Borno, Yobe, Bauchi, Plateau, Kano, Kaduna and Nassarawa. He added that Nasarawa, though not a flash point state, was visited due to the breakout of hostilities between the Eggons and the Fulani.

The chairman said the purpose of the visits were for fact finding, dialogue with stakeholders, commiseration and expression of sympathy, initiating a process of confidence building, and restoration of trust towards reconciliation and healing.

Sources and effect of violence on the north

The committee chairman also informed the governors that the north had suffered “very serious economic, social, cultural and psychological devastation, with relationships among the people severely fractured”.

Mr. Zakari said his committee was able to identify the sources of insecurity in the north; which include economic inequality and narrowing of opportunities, conflicts and unhealthy competition around ethnic and religious identities, ownership and access to resources, unequal access to political power, feeling of lack of respect, and issues around appointments into traditional headship positions.

Other sources of conflicts, he said, are the deterioration in personal and inert group relationships, poverty, illiteracy and ignorance, as well as widespread impunity.

He told the governors that all the factors mentioned earlier are surmountable “if serious consideration is given to the recommendations submitted by the committee in their report.”

People are tired of committees

Mr. Zakari also informed the governors that “the people in the north are tired of having committees every time a crisis erupts, while the recommendations of reports of the committees were hardly implemented”.

He therefore urged the governors to ensure that there is a break of that tradition, so that the report they submitted will be implemented with all the zeal and executive will to achieve the desired peace and progress in northern states.

In his own submission, the chairman of the NSGF, and Governor of Niger State, Babangida Aliyu, agreed with the chairman that people were tired of committees, and pledged the resolve of his colleagues to ensure that the report is implemented.

Mr. Aliyu, who thanked the committee for doing a good job, said “it is heart-warming to note that four members of the committee have been appointed to serve in the Federal Government’s committee on dialogue and peaceful resolution of security challenges in the north”.

He added that the recommendations of the committee could “serve as good reference material for the workings of the Federal Committee”.

Mr. Aliyu also used the occasion to reiterate his call to members of the Boko Haram sect to “accept the offer made by the Federal Government and come forward for dialogue and eventual submission of arms”. – PREMIUMTIMES