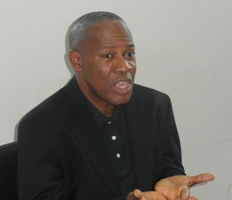 Mr Michael Ovienmhada is aspiring to become the Number One citizen in Nigeria on the platform of the Citizens Popular Party (CPP). The Edo State-born politician and inventor, in this interview, spoke on his plans to create 60 million jobs through agriculture and power sectors, the dangers of nuclear energy and the need for Northern States to reap the benefits of solar energy. Excerpts:

You want to become President of the country on the CPP platform. Why do you prefer a party that is relatively unknown to the Peoples Democratic Party (PDP) and the All Progressives Party (APC)?
I started business at the age on 19. I have started hiring people at that age. So, I’m used to pioneering things. I’m also an inventor. I create things. I don’t stay in my comfort zone. People like me are people who go into a state and think of something that can be done better in such state.When you have that kind of mindset, you become a starter or a pioneer. You just don’t join them, especially in a country where we have serious issues. For 15 years, we have had the PDP in power at the highest level. So also is the APC, called by their different names before they came together, at different levels in parts of the country. It has been 15 years of nothingness. That is why I search for an alternative platform where I believe that we could work things out as a country and as a people and come together with an agenda that can take our country to a place where it ought to be at this point in our development after 54 years. We are looking at taking the country to a place where we can get things working.

How are you going to raise resources to mobilize your campaigns because there are speculations that people who want to contest in 2015 are amassing money through the so-called oil theft?
Nigeria has a population of 170 million people and a voting population of about 50 million people. Now, we have an active population on social media; 55 million young men on social media. When I talk to people in the field and ask them whether they are happy with the way we are as a country. What I hear is disillusionment, anger and a hope that things could be better. I’m hoping that I can tap into this anger and disillusionement and get the people to fund the change that they want. I know that they say Nigerians are difficult. They will not fund change. They need a godfather and all that. But that is not what I’m hearing in the field. People are ready to contribute their N50 and N100 to fund change. What is really the alternative? Four more years of PDP; four or eight years of APC, where will we be in four years from now? There is less power to power the industry. There are fewer hospitals. More people are dying. More children are dying. One million children, between age one and five, die in this country. One million women die every year of child-birth related issues or curable diseases. In many countries now, they have a vaccine for cervical cancer, I have not heard of it in Nigeria. This is something that affects young women. Is it breast cancer? These are things that are preventable. We want to build a new country that works for everyone. If we want to do that, we have to be ready to put our money where our mouth is.What does it take to put a cancer screening centre in every market in this country? If you do that, at least, 325 thousand women will be spared the agony of breast cancer every year.

But the tradition has always been that voters vote for the highest bidder. In Ekiti State for instance, there are reports that voters collect money and bags of rice. If that has been an established political norm, how can you convince 160 million population to fund campaigns, between now and February next year?
The process has begun. For me, it’s very simple. I break down big problem into tiny templates. If we solve the tiny templates, the big problem is solved. There is a big problem calls Nigeria. There are small issues that we need to address. When you ask an average Nigerian if he or she has been a victim of the health system in the country. What is the response? I have been a victim five times. I lost my father, mother, niece, an unborn baby and one of my senior aunts to the poor health system in this country. If you ask any Nigerian, they will tell you that they have suffered a lot like that. So, I’m going to appeal to the basic issues which Nigerians have been suffering and enduring. You need to think differently. When they bring that bags of rice, tell them no, thank you. If you are really hungry, take it and vote for your future…. We have been running an inefficient country for a long time. We used to have jobs in those days. Right now, we have 70 million unemployed young people between ages 18 and 40. I’m going to appeal to them. I have a job waiting for you. I have a plan to create 45 to 60 million jobs.

How do you want to create such quantity of jobs?
You see there are many countries in the world now where unemployment hovers between 0 and 0.7 per cent. Thailand is one those countries. Do you know what they do? It’s agriculture. Thailand produces between 11 and 13 million tonnes of rice for exportation. Their population is just about 50 million. How much rice will they consume? Nigeria imports 6.2 million tonnes of rice every year. We grow only 200 thousand tonnes now. Each hectare of land farmed for rice has the ability to produce 15 jobs down the value chain, from land preparation to planting, weeding, harvesting, milling, polishing, bagging, warehousing and to retailing when you talk of the money that comes out of it and goes into banking. If Nigeria were to have a leader that is able to articulate this issue and tackle them head-on, what are we going to have? In one year, we can cultivate one million hectares of rice land. Each hectare of just normal organic rice will give you between 4.5 and 6 tonnes of rice after harvesting. If you cultivate one million, how many yields are you going to get? You get 6 million tonnes which take care of our need. Most rice can be harvested in 72 days. How many 72 days do we have in a year? We have about five. Let us even assume for the sake of argument that we decide to farm rice just twice a year, we will have 12 million tonnes. This means we can become a major rice exporter and have 50 million people working through that. Are we talking about cotton, wheat, rice, or fish, all of which, we can produce in this country? Borno State alone can produce all the wheat we need in this country- that belt. On wheat and sugar, we spend about $12 to $15 billion to import them. That is a trade deficit for us because we are exporting to other countries what we could have created. The opportunities for job creation are endless in the agriculture sector. I’m going to appeal to these people that their poverty can end in one year. What Thailand did to get to where they are now, 0.7 percent unemployment, is not rocket science. No big macro-economic theories and all that. You want to farm. We are going to create a farming community for you, may be one or two thousand few. You give each person a hectare as he or she wants to do. You give a forward contract to buy the rice on harvest. You get everybody involved. Those are simple ABC approaches to solving unemployment problem.

You have been involved in electricity project. What is your advice for Nigeria on solar and nuclear energy?
In the past two years, I got involved in alternative energy. Some foreign companies wanted to come and invest in solar and wind. In fact, I even attended a wind conference in Atlanta Georgia in July last year. I was the only Nigerian at that conference. I don’t see government representative there. On power, there has been a shift worldwide from fossil fuel because of environmental issues and impacts. That shift has been happening and some countries have been keying into it- countries that don’t even have resources by way of abundant natural sunshine or wind. They have been keying into it with the little that they have and achieving so much by way of results. Germany, for example, set a target of 45 per cent of the total contribution to the national grid by 2020. But Germany has akready exceeded it in 2014. Right now, Germany generates 210 thousand megawatts from solar energy. This is Germany with one-third of the land size of Nigeria. They don’t have as much sunlight as we do. Neither do they have it by length of time as we do. But once winter sets in, it gets shut down. But here, we have sunlight 365 days in a year. And the sun-belt of Nigeria; Kebbi, Katsina, Sokoto have enough sunshine to power the entire Nigerian economy and export power. So, we have a problem of leaders who do not read and think of their people. For them, governance is not about the people, but primarily, about themselves. So, alternative energy is one way to go for Nigeria. We have other resources. We have water and hydro. We have gas. But we have problem with gas. But the alternative energy is the cheapeast way to go. It is expensive in the beginning. But for 25 years, once you installed your solar thermal plant, what you need to do is washing. Then, you have trackers to track the intensity of sun. You get your power working for you. So, the northern governors could have tapped into that natural resource that they have. The resource of high wind speed and intense sunshine. In fact, if I were a Northern governor in Kebbi State, I will go and borrow to do alternative energy to make my state a rich state. You get forward contract because once you are able to generate power to the national grid, you get power purchase agreement. They buy the power from you. It’s a guaranteed income. If they cannot pay you, the World Bank has what is called Partial Rate Guarantee (PRG). They will pay your money. On nuclear energy. I will say no! Countries that have nuclear energy are decommissioning nuclear plants. The nuclear energy is very dangerous, especially for a country as careless and badly managed as ours. You heard of Chernobyl in Russia. Chernobyl was a nuclear plant. When it had a problem, people within a radius of 5 to 50 miles, were affected for many years. You had cases of stillbirth, premature death among adults, breathing problem and cancer-related issues. Nuclear plants are for people whose country is already working. Our country is not working. If we try it, we will all die.