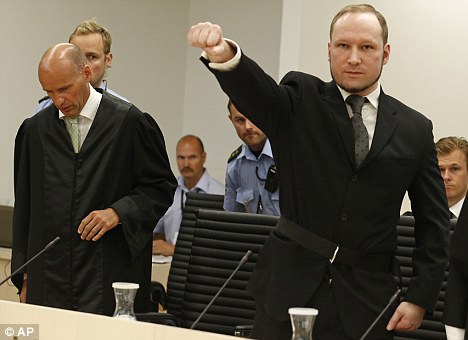 Friday’s court ruling that the man responsible for the bloodiest attacks on Norwegian civilians since Germany’s 1940 invasion was not only guilty, but also sane, is a politically symbolic decision in the eyes of many Norwegians.

The famously tolerant Scandinavian nation is now grappling with the implications of the August 24 verdict, which effectively acknowledges the far-right political message behind the killings.

On July 22, 2011, Anders Behring Breivik killed eight people in a bomb attack in downtown Oslo. Next he embarked on a shooting spree on the island of Utøya, bringing the total number of deaths to 77. Most of his victims were teenagers.

Beyond the trauma wrought by the 33-year-old’s violent acts, Norwegians have been forced to confront the disquieting reality that a contemporary form of fascism lingers on the fringes of their peaceful democracy.

Much of the debate throughout the ten-week trial centred on his sanity, with some commentators dismissing him as a crazy “lone wolf”.

The first two psychiatrists who evaluated him had found him insane, causing public outcry. All subsequent psychiatric examinations found that, while the killer was disturbed, he was aware of his actions.

“Does it matter if Hitler was clinically insane? Is that relevant?” Strømmen said, calling Breivik’s views “a political form of madness”.

On Friday, Breivik was sentenced to 21 years in prison for “acts of terrorism,” including an attempt to “disturb or destroy the functions of society, such as the government” and to propagate “serious fear”.

The judges were unanimous in their decision.

Hanne Skvarteit, the political editor of Verdens Gang, a leading Norwegian newspaper, wrote that it was the right verdict for Breivik’s “rational” insanity.

“We can’t mistake evil for illness,” she noted in an editorial published immediately after the verdict was delivered. “The actions were carried out by a sane man with a sick view of the world.”

Likewise, Andreas Wiese wrote in the Dagbladet newspaper that Breivik was a “sane terrorist,” who “knew what he was doing”.

Strømmen said that authorities had long been blind to the threat of far-right extremism, despite all the warning signs. The author of Eurofascism (2009) and The Dark Net (2011) told Al Jazeera that fascism is alive and well in Europe, posing tangible risks to democratic societies.

The refusal to acknowledge the existence of far-right extremists continued in the hours that followed the Oslo bombing, the journalist said. Even as reports of the Utøya shootings emerged, commentators within Norway and abroad assumed that an “Islamist radical” was the culprit.

“When the reports started coming in that it was a white man of Nordic appearance, some people reacted [by] saying ‘oh, he must have converted to Islam’,” Strømmen said.

“That’s how far the bias had gone.”

Far from being unique, Breivik fits the mould of a typical 21th century fascist, the journalist said. Breivik considers Muslims, leftists and feminists as the enemy, supports Zionism and opposes multiculturalism.

“Many on the left have misused the term ‘fascism’, but that doesn’t mean fascism doesn’t exist,” Strømmen said. “The conclusion that it died with Hitler and Nazi Germany is wrong.”

Hours ahead of the 2011 attacks, Breivik sent a mass email with a political document titled 2083: A European Declaration of Independence. The texts were mostly copied and pasted from the writings of the prominent contemporary fascist thinkers Strømmen had been studying.

His main inspiration was the Norwegian blogger Peder Jensen, who blogs in English under the pseudonym “Fjordman” and has an international following.

Jensen did not respond to a request for comment from Al Jazeera.

On his blog, he has sought to distance himself from Breivik.

After years of finding few publications willing to publish his investigations into contemporary fascism, Strømmen was awarded Norway’s Freelance Journalist of the Year award in 2011. He was a key witness at the Breivik trial.

A week earlier, an independent commission found that the country’s intelligence services should have been alerted to the killer’s plans in time to prevent them. There was an institutional blindness towards the risk of far-right violence among the country’s political leaders and its security services, the report by the July 22 Commission found.

Guri Hjeltnes, a Norwegian historian who served on the commission, agreed that evidence showed intelligence agencies had been preoccupied by the threat posed by so-called Islamist extremists, while neglecting the risk of far-right violence.

“We documented in the report that better coordination internally [by the Norwegian Intelligence Service] could have picked him up,” she told Al Jazeera.

The judges’ decision to interpret Breivik’s act as a political statement rather than an act of insanity, Strømmen argued, allows for more awareness of the threats posed by far-right ideas creeping into conventional politics.

“The danger lies in these ideas becoming mainstream, because that can affect how a society works, and could make European countries worse places to live,” he said.

Xenophobia has hardly evaporated since the Breivik attacks, but most people interviewed agreed that there was more open debate about the broader issues, notably immigration.

In July, however, Roma refugees became the target of an outburst of hate speech on blog forums. A Roma camp was attacked with fireworks and stones.

Maria Rosvoll, who focuses on the question of Roma rights at the Centre for Studies of Holocaust and Religious Minorities in Oslo, said recent debates have been consistent with historic European-wide anti-Roma sentiments.

While this particular outburst of intolerance was not fueled by the Breivik case – his primary targets are Muslims and Norwegian politicians – the tone subsequent debates was certainly affected by it, she said.

“That was the debate this summer, many people were very conscious of [the dangers of far-right racism],” she said.
“It is as if Norwegian society is more divided now; the divides are clearer now,” she said.

Some Norwegians are saying that while they oppose Breivik’s acts, they sympathise with his political arguments, she said. Others are more adamant in their opposition to all forms of racism and reject everything he represents.

The sane ruling has opened up new ground in Norwegian society that is likely to test the limits of public debate.

It is the verdict Breivik had hoped for, in his desire to promote his beliefs. But it is also the verdict most of the families had called for, in their desire to have resolution and justice. – Aljazeera