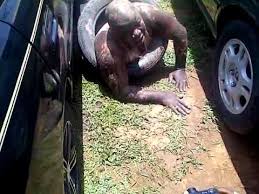 Vanguard gathered that the assailants were said to have arrived the deceased workshop in a taxi cab around 4:15p.m. and met Ajia alone in his shop.

They then proceeded to under the bridge, close to the State Stadium complex, where the deceased operated a car wash, shot him several times on his forehead and dealt several machete cuts on his lifeless body to ensure that he was dead.

Vanguard further gathered that before passers-by could discern what happened, the assailants had jumped into their car and sped off.

Late Bayo Ajia being beaten by soldiers in 2014

The deceased, who is survived by four wives and many children, was buried shortly after at the Muslim cemetery at Irewolede in Ilorin metropolis by his friends and associates amid wailing.

State’s Police Public Relations Officer, ASP Ajayi Okansanmi, who confirmed the incident, however, said he had not received full details of the circumstance that led to the incident.

It would be recalled that late Ajia was sentenced to death by an Ilorin High Court in 2004 over a murder case.

He went to the Court of Appeal, but his sentence was subsequently affirmed by the Supreme Court.

He was, however, granted state pardon by the Bukola Saraki administration. –Vanguard

Kwara State governor, Dr. Bukola Saraki, has granted pardon to two notorious convicts in the state by having their death sentences commuted to pardon.

The two convicts are Bayo Ajia and Olayinka Are, who were both sentenced to death by the state High Court on charges of culpable homicide in March, 2005. Leadership