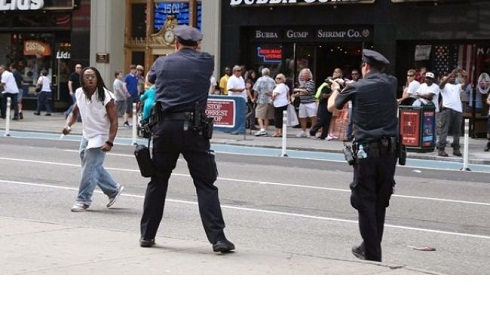 Editor Note: Weapons should never be fired above belt, especially in such a crowded square. Twelve shots were fired! There were several options of incapacitating the insane victim. US Police have been ordered on battle mode. Please watch your thoughts around them. It’s shoot to kill. This goes beyond Obama and Police, we have lost our sense of humanity.

August 13th, 2012
New York City police has shot dead a 51-year-old African American man, who the police said was wielding a knife at them.

Police spokesman Paul Browne said on Sunday that officers approached Darrius Kennedy while he was smoking, he became nervous, and pulled out a knife from his pocket.

The two police officers, who were involved in the excessive use of force, have been placed on administrative duty.

Officers said Kennedy was wielding a knife and the shots were in self-defense. However, the victims’ family argued that the situation should have been handled better.

In an interview with Press TV on April 16, Malcolm X’s grandson, El-Hajj Malik El-Shabazz, said that African Americans are murdered with impunity in the US because the system is unjust.

Commenting on the murder of 17-year-old black teenager Trayvon Martin, who was gunned down by a white man in Sanford, Florida on February 26, Shabazz said, “There are hundreds of Black Americans who are being murdered in the United States every year with impunity. And police officers serve no time. They always get off.”

He said this occurs because there is institutionalized racism in the United States.