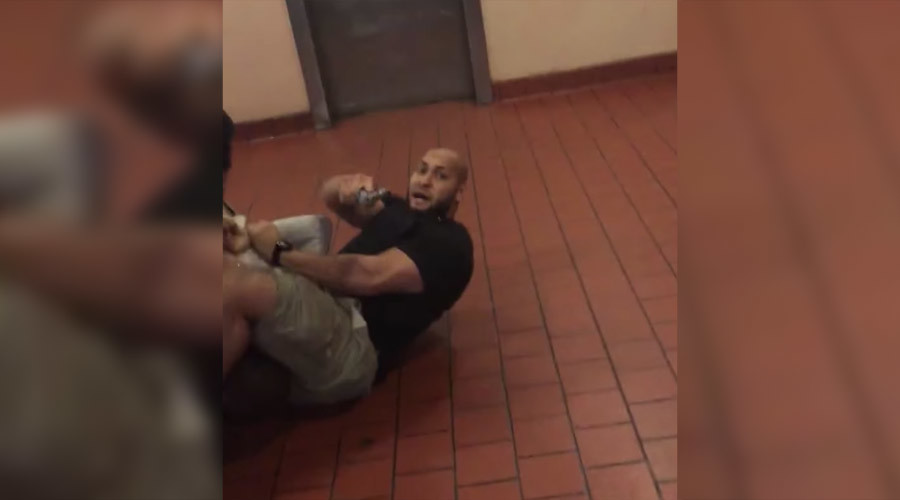 An NYPD cop was caught on video aiming his gun at someone recording him and punching an innocent by-stander after he violently arrested someone using an “illegal” dirt bike.

26-year-old Officer Risel Martinez has been relieved of his firearm and badge while an investigation into his actions is carried out by the Internal Affairs Bureau (IAB), known as the ‘rat squad’ by the ‘boys in blue.’

Eyewitness Calvin West posted an explanation online of how the cop pulled a gun on him after he and others questioned the use of force in the arrest.

“I witness[ed] police brutality today and it just has to stop,” West posted on Facebook. “I’m sitting there recording the cops beating and abusing a young man and he [police officer] sits there and pulls a gun… for no apparent reason.”

His video shows two cops grappling with Dayshawn Bettway in an apartment block in Harlem, according to the New York Post.

Bettway had reportedly been circling police on a bike as they stopped a vehicle, later found to contain ammunition and marijuana.

Martinez, dressed in a black T-shirt and shorts in the video, can be seen with his legs wrapped around Bettway’s head. At one point, the 23-year-old appears to say that he “can’t breathe.”

The cop then grabs his weapon and points it at a number of nearby witnesses, warning them to “back up.”

“Back up. I’m not playing. Back up, get out,” he shouts, aiming the pistol directly at the camera.

A video uploaded to Instagram by Roland Stone shows the same cop then punching a 19-year-old man outside the residential block, before dragging him to the ground.