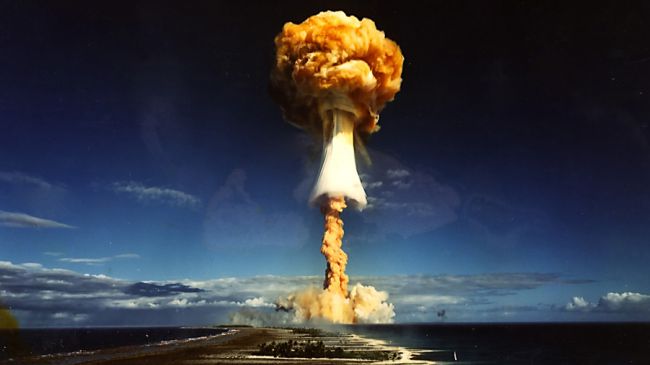 There are strong confirmations that one or more nuclear weapons, known to have been stolen but kept from the public to “prevent panic,” may well be deployed in American cities by extremist elements with probable ties to a foreign intelligence agency.

PressTv– This scenario was the basis of the television show “Jericho” several years ago. However, this time there are real culprits and real motivations, both the overthrow of the government of the United States and the naming of Iran as a “scapegoat.”

The plot has been tracked to groups within the Pentagon, several government agencies and wealthy and powerful extremist backers of Netanyahu and, in particular, the “Gulf Cartel” operating from Mexico that has penetrated nearly all levels of government, law enforcement and the military across the country.

Six days ago, the President of the United States, on his official public website, issued a warning about “government insiders” who were planning “violent acts” against the “government and the nation.”

MEMORANDUM FOR THE HEADS OF EXECUTIVE DEPARTMENTS AND AGENCIES

This Presidential Memorandum transmits the National Insider Threat Policy and Minimum Standards for Executive Branch Insider Threat Programs (Minimum Standards) to provide direction and guidance to promote the development of effective insider threat programs within departments and agencies to deter, detect, and mitigate actions by employees who may represent a threat to national security. These threats encompass potential espionage, violent acts against the Government or the Nation, and unauthorized disclosure of classified information, including the vast amounts of classified data available on interconnected United States Government computer networks and systems.

The Minimum Standards provide departments and agencies with the minimum elements necessary to establish effective insider threat programs. These elements include the capability to gather, integrate, and centrally analyze and respond to key threat-related information; monitor employee use of classified networks; provide the workforce with insider threat awareness training; and protect the civil liberties and privacy of all personnel.

The resulting insider threat capabilities will strengthen the protection of classified information across the executive branch and reinforce our defenses against both adversaries and insiders who misuse their access nd endanger our national security.

Despite the public nature and seriousness of this announcement and the draconian measures alluded to in order to “mitigate” the threat, no member of the opposition party which usually jumps on any and every word the president says has mentioned anything.

Moreover, there has been a total press blackout on this press release, which is prominently displayed on the White House website. Those we have spoken with at the highest levels of the military and key intelligence and law enforcement agencies indicate they have never seen a statement of this kind and find it shocking.

All find it frightening and for good reason.

Sources within the intelligence community have confirmed that key former military personnel, some employed by the government to provide security for nuclear facilities, others with training in the assembly and detonation of “special weapons,” are being sought and actively recruited by “militant extremists” who represent, for the most part, powerful international corporations.

Though this group was initially tracked down through counter-narcotics investigations, their membership includes at least one major hedge fund, top law firms, major media players and even religious organizations.

We keep returning to the White House warning:

“…to deter, detect and mitigate actions by employees who may present a threat to national security… These threats include… violent acts against the Government and the Nation…”

When all major media and political groups chose to suppress reporting of this threat, a press release that, normally, would have been turned against President Obama in order to label him a “wild conspiracy theorist,” this became more than real, it became genuinely terrifying.

Rush Limbaugh and Fox News typically would have dedicated hour after hour of accusations, “the president is now a dictator,” or “Obama has gone insane.”

Instead, we have total silence.

After 9/11, a controversy that divides Americans into those who follow the flood of hard evidence of a cover-up and demand justice and real retribution against those who bask in blindness and ignorance, one serious fact has escaped many.

How can America, exhausted after losing two wars, increasingly aware that our news, even our history has been fictionalized and propagandized, be manipulated into blindly following a conspiratorial cabal after a “too conveniently timed” national disaster.

The last election in the US was even more bizarre than the several that preceded it. Mitt Romney, predicted by many to win easily, lost by a huge electoral margin despite every imaginable attempt to rig the election from voter intimidating to hacking voting machines.

Contacts within federal law enforcement indicate that Romney may well have faced arrest for a wide variety of charges tied to narcotics, money laundering and organized crime until investigations were shut down by the Bush administration after 9/11.

The previous candidate from the same party was saved from prison through a secret presidential pardon and if tried based on direct accusations made by Colonel Ted Guy, would only now be considered for release from prison.

When you add this to the fact that nearly all top members of the Bush administration are unable to travel because they face criminal prosecution for war crimes and are actively evading arrest, the true nature of the relationship between a vast international criminal conspiracy and key players in America’s ruling oligarchy is more than obvious.

Thus, when a threat of an attack on the “government and nation” is revealed, two things become obvious:

1. Only a nuclear attack, likely more than one location, could push America to the new war Israel wants and bully the American people into even more “police state” legislation and the total abandonment of what is left of democratic government.

2. News and entertainment have been systematically pre-staging such a move through highly fictionalized and propagandized “brainwashing” that is intended to make Iran the scapegoat for what President Obama has now revealed is actually an “insider threat” within the American government.

As early as 1990, three South African nuclear weapons, purchased by Britain, three out of ten manufactured at the Armscorp Pelindaba facility, were stolen. The purchase of the weapons was authorized by Prime Minster Thatcher and handed by Dr. David Kelly, the murdered weapons scientist, and a young assistant, David Cameron, currently Prime Minister of Britain.

False reports that Iraq had stolen these weapons made up the real “secret brief” used to justify the invasion of Iraq. Only later, in 2009, when one of these weapons was exploded by North Korea, did it become clear that there was an open market for nukes and that some of the players were considered “friends” of Britain, France and the US.

In 1991, the US lost three more nuclear weapons in an air crash off Somalia, weapons believed to have been recovered and marketed by former South African Defense officials.

The US mounted a massive recovery effort tied to these weapons in 1993 in Somalia and sustained considerable casualties.

A movie was made about it, “Blackhawk Down.”

In 2007, a religious cult within the US Air Force stole between 6 and 9 H Bombs and loaded them on a B-52 bound for “places unknown.”

Not all of those weapons were recovered when the plane was forced down at Barksdale Air Force Base. The public was told a wild story of dozens of mistakes in mishandling nuclear weapons.

There is substantial reason to believe that, in order to shift blame from powerful extremist groups in the US, with ties to drug cartels and multi-national organized crime, the “Global War on Terror” was begun and the non-existent organization, “Al Qaeda” was invented.

Historical record will prove that the US Department of Justice did, in fact, invent “Al Qaeda” in order to bring “conspiracy” charges against Osama bin Laden where there was absolutely no evidence of his involvement. We are speaking of the East Africa embassy bombings.

President Obama, in his November 21, 2012 press release has, after all these years, finally admitted that the American government is deeply infiltrated with militant extremists who have used false flag terror to push their political agenda.

In fact, the Bush 43 administration was almost entirely made up of militant extremists and, were it not for the political defeats of both McCain and Romney; organized crime would have had the military forces of the US as their “private army” for eight more years.