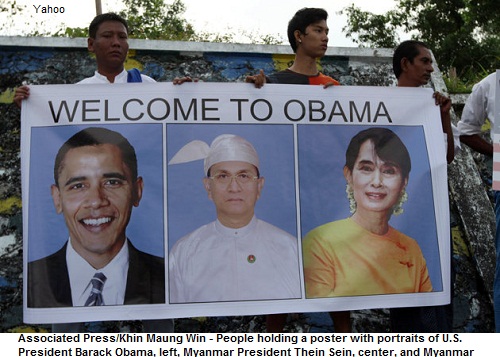 In one brief visit on Monday morning, President Obama drew crucial attention to one of the world’s most egregious human rights tragedies, the plight of the Rohingya Muslims in Myanmar’s Rakhine state.

A Muslim minority situated along the country’s western coast, the Rohingyas have been brutally targeted for extinction by ethnic Arakanese, aided at times by government security officials. Satellite imagery released by Human Rights Watch earlier this month exposed destruction covering 348 acres and involving at least 4,855 destroyed structures. At least 200 people have died in recent attacks, and more than 100,000 people have been displaced in the violence.

The Rohingya Muslims have faced a campaign of terror simply because of their faith and their ethnic identity. Their plight has been largely unnoticed in the international community, and ignored by the government of Myanmar.

That’s why I was elated to see that President Obama took time during his Monday visit to Myanmar to visit with an advocate of the Rohingya community. This simple action spoke volumes of the U.S. commitment to this suffering Muslim minority, and the ongoing pledge of the Obama administration to encourage true progress in Myanmar. In a statement during his visit, Obama urged the nation to view its “diversity as a strength, not a weakness.”

Last week I spoke to the Organization of Islamic Cooperation (OIC) Permanent Observer to the U.N., Ambassador Ufuk Gokcen. He told me personally of his recent visit to Myanmar, where he traveled to Rakhine state to visit the Rohingya population and report firsthand on the tragedy. Read more