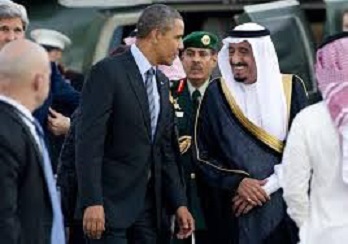 President Barak Obama has a challenge and an opportunity when he meets this week first with Saudi King Salman and then with the leaders of the six Gulf states. His challenge is to manage increasingly fundamentally diverging policy differences. His opportunity is to push for political and social change given that the United States’ alliance with Saudi Arabia is unlikely to revert to the status ante quo at a time that the kingdom confronts existential threats.

It’s finally out: The Turbulent World of Middle East Soccer. To order: http://www.hurstpublishers.com/book/the-turbulent-world-of-middle-east-soccer/

The list of differences between Saudi Arabia and the United States that have emerged since the 2011 Arab popular revolts is long and growing. It starts with US support for the toppling of Egyptian President Hosni Mubarak, a longstanding American ally; US criticism of the squashing in 2011 of a popular revolt in Bahrain with the help of Saudi troops; Mr. Obama’s backtracking in 2013 on a promise to act if Syrian President Bashar al-Assad were to use chemical weapons; and for now ends with the conclusion by the United States and other world powers of an agreement to end the Iranian nuclear crisis that is leading to Iran’s return to the international fold.

If those and other steps were not enough to convince Saudi Arabia that the United States, its foremost protector for which there is no immediate alternative, no longer was an ally that would come to the help of its friends no matter what, Mr. Obama drove the message home in a series of interviews with American journalist Jeffrey Goldberg.

Mr. Obama laid out a vision of diminished significance of Saudi Arabia and the Middle East to US national security, a need for US allies to shoulder their responsibility in ensuring regional stability rather than acting as free riders on the coattails of a United States that pulls their chestnuts out of the fire, and a world in which the kingdom would have to share regional power with its archenemy, Iran.

In response, Saudi officials with Prince Turki al-Faisal, a former intelligence chief and ex-ambassador to the United States, in the lead rejected the president’s assertion that Saudi Arabia had failed to pull its weight. Prince Turki listed numerous incidents in which the kingdom had helped the United States. At the same time, US officials noted that despite differences the US maintained close military, security and intelligence cooperation.

The Saudis nonetheless did themselves no favours when they recently warned US officials and members of Congress that the kingdom might sell off up to 750 billion dollars’ worth of American treasury bills and others assets held by Saudi Arabia if Congress passes a bill that would allow the Saudi government to be held responsible in US courts for any role in the 9/11 attacks. Obama administration officials have been lobbying Congress to drop the proposed bill.

More fundamentally, Saudi Arabia concluded from the US’ shift in approach towards the kingdom and the region that it needed to be more assertive in both its foreign and military policy in a bid to solidify its position as a regional power and ensure that the regional line-up would back it in its long-standing struggle with Iran for regional hegemony.

Implicit in the Saudi actions is the hope that increased tension in the Middle East will force, if not Mr. Obama, then whoever wins the November presidential election in the United States to engage, and that a Saudi-led Sunni Muslim alliance will be able to counter Iran’s ambitions as a regional power. In various interviews in recent months, King Salman’s powerful son, Deputy Crown Prince Mohammed bin Salman, has stressed that the kingdom is seeking US re-engagement.

The problem is that Saudi hopes are likely to prove to be wishful thinking. Even if the United States were to re-engage in the Middle East, it would not constitute a return to the status ante quo in which Washington largely sided with Riyadh and shared the Saudi goal of completely isolating Iran. Moreover, Iran’s emergence as one of the Middle East’s foremost regional powers is inevitable while Saudi Arabia’s ability to match if not surpass Iran is a lost cause.

Current Saudi regional leadership is the result of the kingdom’s ability to exploit a window of opportunity rather than reliance on the assets and power needed to sustain it. Saudi Arabia’s interest is to extend its window of opportunity for as long as possible. That window of opportunity exists as long as the obvious regional powers – Iran, Turkey and Egypt – are in various degrees of disrepair. The lifting of punitive international sanctions and international isolation as part of the nuclear agreement no longer stymie Iran in asserting itself as a dominant regional power. Saudi support of Egypt, the Arab world’s most populous country, is in effect an effort to compensate for the kingdom’s weaknesses.

Mr. Obama is likely to smooth ruffled feathers in his talks with Saudi and Gulf leaders, but will probably fail to erase regional doubts about the reliability of the United States as an uncritical ally that seeks to align its policies with those of its allies and can be counted on to be there in what Gulf leaders might see as a time of need. It is that crucial change in mutual perceptions of one another that holds opportunity for Mr. Obama, particularly at a time that the United States and the Gulf alongside many other nations seek to counter militant Islamic radicalism and defeat the Islamic State.

Mr. Obama’s predecessor, George W. Bush, recognized in the wake of the 9/11 attacks that US support for autocratic, repressive Middle Eastern and North African regimes had contributed to an environment from which the 9/11 attacks emerged. Mr. Bush sought to address the issue with his ill-fated democracy initiative.

US support for civil society groups was moreover stymied by the US’s reversal to a policy that favoured regional stability through support of autocracy instead of political, economic and social change. Nowhere is Middle Eastern autocracy’s contribution to potential breeding grounds for militant Islam more evident than in the puritan, inward-looking, intolerant world view of Wahhabi and Salafi interpretations of Islam that are promoted globally by the kingdom.

Mr. Obama, by putting forward a worldview in which Saudi Arabia and the Middle East is of less importance to the United States and by acknowledging policy differences, has created the space to support civil society groups in the region even if regimes would take a dim view of such actions. While there is no indication that Mr. Obama intends to exploit that opportunity, the fact remains that militant Islam and the likes of the Islamic State can only be sustainably stymied if political change is part of the policy mix.