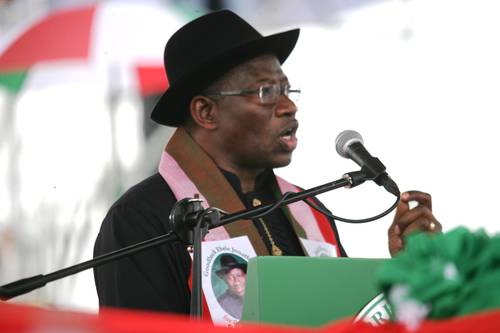 Former President Olusegun Obasanjo was conspicuously absent at President Goodluck Jonathan second term declaration for the 2015 presidential election in Abuja on Tuesday. Also absent was a former military leader, Ibrahim Babangida. Both are members of the Peoples Democratic Party.

There are speculations that President Obasanjo was against the return of President Jonathan because of the alleged agreement he (Jonathan) had with the leadership of the party, including the governors in 2011, that he would only be in office for one term, after completing late Umaru Yar’Adua’s tenure.

Meanwhile, there were mixed reactions to the President’s self assessment at his declaration for the 2015 election. Jonathan, who admitted that the Boko Haram issue had been a big challenge to his administration, listed his achievements in various sectors.

A former chairman of Ikeja branch of Nigerian Bar Association, Mr. Monday Ubani, said Nigerians could not be carried away by the list of achievements reeled out by the President.

“Nigerians are already used to this road; the road of leaders coming out to tell Nigerians about their achievements that are not seen. Leaders at state and local government levels during the period of elections come out to say a lot of things. We are used to it but we are not carried away by their claims.”

On his part, Mr. Eze Onyekwere, in a chat with Punch, said:

“I will assess him as a student who want to get let my people go, which is about 40 per cent. We can afford to do more than two times as better as we are doing now in terms of uplifting the standards of living.

“To whom much is given much is expected and we have abundant resources but we are yet to fully get to utilise that resources for the benefit of Nigerians.”