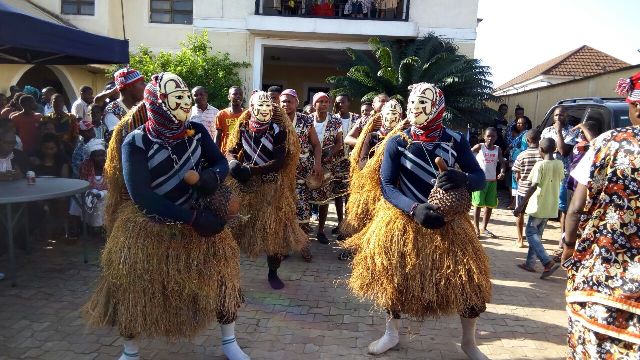 Former Corps Marshal of the Federal Road Safety Commission, FRSC and Ex-Aviation Minister, Chief Osita Chidoka has called on Igbo people across the globe to be proud of their cultural heritage and join hands for its promotion as well as development of Igbo land.

Boys and girls, men and women, even spirits, in the form of masquerades came to partake in the feasts.

According to Chidoka who spoke with journalists, the Igwe Obosi, who is the king had held his own Obiora the previous day, to give leeway to citizens of the community to celebrate. Hear him; “In the community, Obiora Igwe happens on Saturday, and the following date, the Ndi Ichie hold theirs in their various families. So it’s our cultural arrangement. So if you go round Obosi today, the various Ndi Ichie are at home holding their Obiora”.

Explaining further about the importance of the festival, Chidoka revealed; “Yam is at the centre of Igbo economy. The Igbo economy was at one time defined by yam, so every man that is strong is known by the size of his barn. So you hear the story from Chinua Achebe’s ‘Things fall Apart’, so you hear the story of Unoka as the lazy man who did not go out to tend to his farm.

He continued; “We remember Okonkwo starting off his life, and the first gift he got was seedlings from his uncle so that he can become a farmer. And when he borrowed those seedlings there was a great famine in the town and he lost a lot of yam that year.

So yam has always been a defining ingredient between the rich and the poor, the hard-working and the strong. Yam is so essential in the quality of igbo life, it made it possible that Igbo people learnt to be industrious very early, because to plant yam, you need to plant at the right time.

“You need to dig, and put a stick to manage the tendrils to grow well. When it’s time for harvesting, you need to be patient. You have to harvest it gently in order to bring it out from the ground. Any attempt at being fast, lazy or doing it haphazardly will lead to breaking the yam. So the process of yam farming ensures that Igbo people have a natural instinct to industriousness, and that is the reason why during the slave trade era, many Igbos were taken to those colonies where they planted tobacco. Tobacco planting is almost like yam planting. It’s something you have to tend very gently.

“So you find that the Igbo slaves were very adept at the plantations. So if you go through Virginia, South Carolina, Igbo slaves abounded. This was because they were found to be the people who had the temperament, the industry and the hard working ability to manage the tobacco crop. So yam has always been a defining crop for the Igbo. It is our estimation of wealth, and in today’s world, yam still symbolizes our hard work, our industry and our attitude to agriculture”. He said.

Although the New Yam festival is celebrated in every community of the Igbo nation, each community has it’s unique qualities that stands it out from the other.

The Obosi for instance, celebrate children, and after cutting roasted yam brought to him, with red palm oil garnished with pepper, ukpaka, dry fish and other delicious delicacies of the Igbo people, Chidoka set to work.

Ike Obosi (strength of Obosi) as he is fondly called by his people then invited all the children present to feed them. This act is reminiscent of the feeding of the 5000 by Jesus Christ, because, as soon as that call was made, thousands of children flooded the podium.

It took the joint effort of some able bodied young men to organize them and compel them to stand in three lines and wait to receive the piece of yam dipped in palm oil. Each took his and ate with delight as he or she walked away.

The other teeming guests, who are in consonance with the tradition waited until the kids have eaten.

After the feeding of the children, different types of delicacies were served and everyone began to eat. Chidoka also showed his dancing abilities as he stood up several times and danced with the different masquerade and dance groups.

The Igba Araba and Ajugwu musical groups featured prominently among those who played. Great masquerades like the Ajo Ofia, from whose head fire burned was also among the entertainers that thrilled.

Speaking on the importance of the event, an elated Chidoka who was sweating as well as he was happy said; “Every human being has an identity, and once you have an identity, you have a culture. I am first and foremost an Obosi man, an Igbo man and a Nigerian. All of these are what I call our various categories and I make sure that every time in my life, I affirm my own identity and my consciousness. So as an Igbo man, I am very proud and happy to be Igbo. I want to be able to accentuate and project all that is positive about Igbo. In our interactions with the rest of the country, I feel a certain generational burden to reinterpret Nigerians to Ndi Igbo, and interpret Ndi Igbo to Nigerians. This is because there are lots of misconceptions about who we are, and why we are the way we are. But understanding our history and culture will enable people understand us and build a better Nigeria”.

He also threw more light on the history of his town; “Obosi has an old traditional institution. When the Eze Chima clan migrated from Asaba down to Onicha, part of then came into Obosi, and founded the traditional institution that we have today that its over 400 years old. So the first Eze in Obosi, Eze Shine was the first Obosi man to rule the land and that was about 400 years ago. This is the history of our people and ndi ichiec which is a significant aspect of our culture”.

“Ndi ichie represents families and quarters in the cabinet of the Eze Obosi. So, the new yam festival is when we consider our harvest season. We consider it the New Yam festival. When we bring the mind of the whole community together, when we forgive our enemies, when we remove all forms of violent and regenerate ourselves for the next planting season. So it is called Obiora in Obosi because it is just the iwa ji that is the significant thing there, it is the period of regeneration which is the significant thing in our culture”.

The former Minister of Aviation offered advice on how Igbo culture can be advanced; “I think that the whole idea of culture and tourism is something that we are taking for granted in South East. I think that Anambra state can actually restructure the new yam festival and synchronize it as something that happens simultaneously within the period of one month so that people who visit Anambra during this period will know that they will see masquerade and new yam festival at least for four weekends beginning from September all through October.

State Government should work towards establishing that event as a significant portion of our culture. So you know that if you are in Anambra this time, it will be a time to celebrate and visit various towns. Visiting home must not be during burials only, so when the new yam festival is synchronized we will have a whole month of celebration in the state, he added.

“Tourism is critical to every society, society itself needs to improve to offer something to the tourist”.

The new yam festival however turned political, when groups and stakeholders in attendance called on Chidoka to join the race for Anambra State governorship position in 2017 so as to fix the state from what they called its present state of underdevelopment.

Speakers who made remarks at the event insisted that Chidoka was ripe for the governorship of the state and that he should not deny the state of his sterling performance.

A political organization, G32 first caused a stir when they stormed the arena with a banner announcing the entrance of the former FRSC boss in the Anambra governorship race, and was applauded by all.

Another group, Dozie Anambra Initiative who were also at the event announced that no time was better for Chidoka to join the race than now that the state needed to be salvaged from bad leadership.

The secretary of the group, Mr Obi Okpala in an interview with journalists said the group was at the event to persuade Chidoka to reconsider his hard stance and join the race to salvage Anambra with his Midas touch.

Okpala said Chidoka has proven his leadership capacity both at FRSC and as the minister of Aviation, and that he should be given the chance to fix the state once and for all. He said some of Chidoka’s advantages over other contenders is that he is young, and has proven himself beyond doubt to be an achiever.

Earlier in an interview, Chidoka admitted that Anambra State needed a fresh hand to steer the state off the hard times being experienced in the country today.

He however admitted that he has severally been prodded by various stakeholders in the state to join the race with a view to giving it purposeful leadership, while admitting that he was waiting for God to direct his steps and would not hold back if urged to.