In October of 2013, on the 15th of the month to be precise, Nigeria was lit up with the Stella Oduah scandal. The so-named #OduahGate. Our then minister of Aviation under the Jonathan administration was hounded and eventually forced out of office for a “scandal” SaharaReporters broke of her purchasing for N255 million two bullet proof BMW’s that according to PremiumTimes should cost tops, N128 million. In effect Stella fleeced Nigeria of about N100 million; that’s about $625,000!

We saw all holier than thou activists, newspapers, bloggers and the like screaming to the high heavens about Stella’s misappropriation. She was called all sorts of names and eventually she was rightfully kicked out of the government by a reluctant Jonathan. Indeed this scandal was one of the main factors that fueled angst against the Jonathan administration and sent it packing.

Fast forward to now, 15th of October, precisely two years later. A newly nominated and now confirmed minister, the former governor of Lagos state, Babatunde Raji Fashola was accused of misappropriating N139 million ($870,000) for the dredging of two boreholes, according to Lagos state government and as contained in all main media outlets.

In essence, new minister Fashola’s government spent what could drill give or take, 800 boreholes to drill just two. Or we may say, his government misappropriated/looted/coveted $868,000! Over $230,000 more than we stoned Stella for. 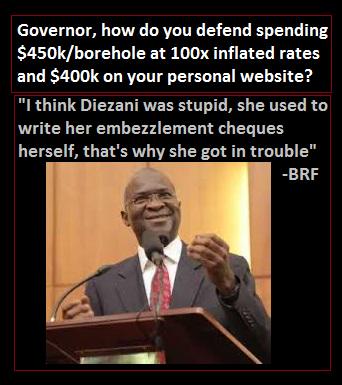 And we just supervised his nomination, confirmation and as we all observed, those same “activists,” those same media…we have reviewed comments by all the many names of 100k+ fans and likes popular activists, the same people that cast the stones at Stella and the common reaction is, “Fashola slammed it.” PremiumTimes gave him an 8 or 9/10 for performance despite recognizing and criticizing his lackadaisical response to serious queries of the gross abuse of the funds by his administration which in their words he gave an “obfuscated” response to.

Fashola’s response to the tribunal was a slight to the panel and Nigeria as a whole. He put his finger up the “Change” act’s nose. He said, “I am a Lawyer and so I should not be expected to do the numbers.” This was the height of recklessness and political office-holder insolence. He further said, “I do not personally sign the cheques.”

Well Stella Oduah does not sign the cheques either. Diezani never signs the cheques. The response Fashola gave was elitist, condescending, averse and insultingly perverse. “I hope my loyalty will not be questioned,” he further said in honesty.

Is this what we are? A nation of hypocrites? Is it about “loyalty” for all the activists and media that hounded on Stella but praise and positively appraise Fashola?

Of course the Senate loves him and confirmed him. They need the likes of him to protect them and their extravagant ways as well as his and their coterie of cabal: cement, phone and oil monopolist bed-mates. 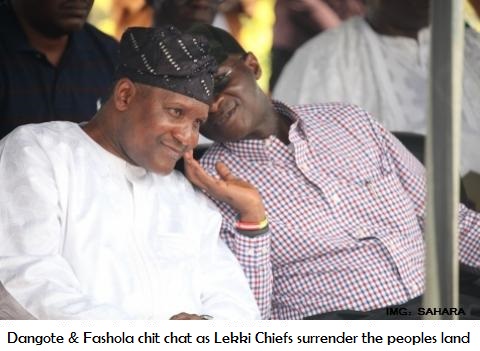 So aloof and unabashed of his grievous crime as executive governor of the state whose reckless spending was under review, does this not mean that as a new Minister, millions of dollars / billions of Naira will likewise be formally looted and a straight-back, raised chin political-position-dependent Fashola will again tell us that he does not sign the cheques under his ministry?

I am lost for words. I hope I got something wrong here. Perhaps he did not spend the acclaimed sum on just two boreholes. Perhaps it was ultra-efficient, acres cooling water fountains and farm rigging systems. Perhaps this is why he brazenly slighted us in response. Hopefully he knows it is semi illegal for his government to be drilling boreholes when it should be providing pipe-borne water. I must be wrong. Of course, If I was wrong, he would/should have told us the correct thing at the screening…no? Please correct me if I am right [RO].

Nigeria will make it!