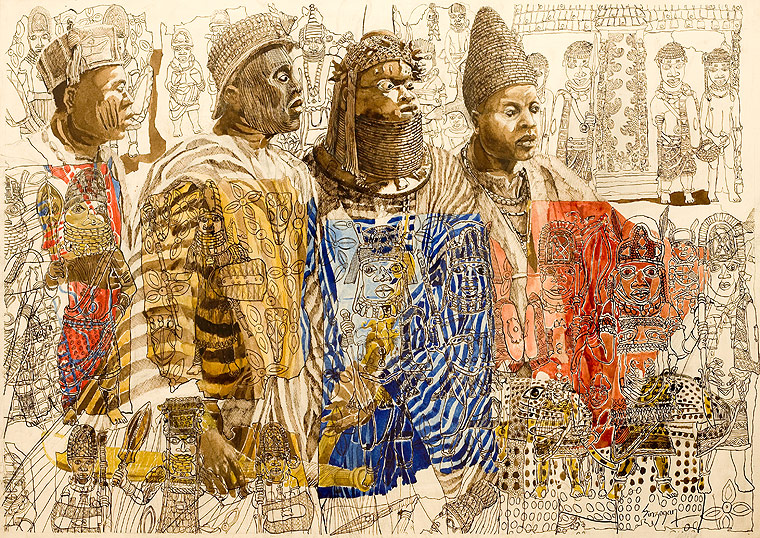 The most objective way to tell the history of a people or ethnic group like the Bini is to look at historiography from their perspective. In other words, in light most favorable to them: in Jacob Egharevba Ekhere vb’ Itan Edo. No historian could have worked harder on Bini. Despite Jacob’s effort from the 1st to the 4th Edition of his books. The facts that Ogiso and Oba Dynasties came from Ile-Ife, never changed. Adumu as common ancestor of Ijaw, Edo and Yoruba was revealed!

It was Adumu/Oduduwa’s folks, today’s Ijaw, Edo and Yoruba progenitor that intermarried with autochthonous Ooyelagbo in Ile-Ife, Efa in Bini and Oru in Delta. The relationship between Ile-Ife, near Nupe then, and Bini heralded the Oduduwa or Adumu Dynasty in Ile-Ife. Casting away myths or fantastic stories substituted with archaeology and other scientific facts as radiocarbon dated burial of Ogiso body parts in Ife, it became clear that both dynasties came from Ile-Ife.

When the Ujo or Ijaw left Ile-Ife, Adumu or Oduduwa had established over the autochthonous Ugbo or Ooyelagbo. Adumu/Adimu/Oduduwa as a “multiracial” of Ugbo and Tapa from Nupe area and certainly had the blood of Ooyelagbo to rule. This was depicted in the power struggle between Adumu and Obatala descendants. It suffices to understand that the mythical Adumu existed well before Christ compared to his recent descendants in Bini, Ijaw and Yoruba history.

It boils down to waves of migration from Sudan north and south, the builders of Egypt mixed with autochthonous Rain Forest people that claimed they never migrated from anywhere but were created on their land. So it is the Bantu that mixed with autochthonous Nri Ibo/Igbo Oru, Osu claiming they never left their land or had no king. Just as Ugbo/Ooyelagbo in Ife and Efa in Bini. There is a distinction between Oba or Obi ruling class and land owners they intermarried.

Ijaw like others, mixed and left many lands of Kumoni, Efa in Edo to Bantu, Osu in Delta regions before the 2nd Dynasty of Oba from Ugbo Ile-Ife to Edo. Urhobo and Ijaw had left Aka (Edo) before the 2nd Bini Dynasty of Oba arrived. According to Prof. Peter Ekeh: Urhobo language yields clues to the profile of the society and culture which the Ogisos ruled. Urhobo know this king by his usual name Ogiso, without any other titles. He was their king. On the other hand, Urhobo know the kings of the House of Eweka more distantly as Oba r’ Aka, the King of Benin.

“Ogiso ma miemwe efiagba” Ogiso never convened meetings but in times of trouble or crises. Moreover, the Oduduwa/ Adumu that sent the Ogiso could not have been the same Oduduwa that sent Oba. Oba of Bini banished his son, Kaladerhan with his mother from the city instead of killing him and he eventually became the Founder of Guwatto (Ughoton) on the bank of a river, after wandering in the forest. Yet many Edo that celebrate the banishment of Ekaledarha with establishment of Ughoton have not spoken up that he was never lost to Ile-Ife and his time or that of his father could never have been the same with that of the ancient Oduduwa/Adumu.

As this writer had asked in – The Father Of All Nigerian Ethnic Groups” – on their way from and to Egypt, Saudi Arabia or Israel, Nigerians never met one another? They all found themselves in the same location or split into sub-ethnic groups claiming suzerainty over one another. In the case of Bini and Ife, Ekalarhan son of the last Ogiso that fled and established Ughoton has been reincarnated in 2004 as ancient the Oduduwa/Adumu known to other ethnics before Ogiso.

Note the migration waves of rulers as Ogiso, Oba and Obi to landowners: Eri, Osu, Efa and Oru. The Yoruba or Yooba today claimed the world started in Ile-Ife. But Bible writers claimed Eden Garden with Adam and Eve. Scientific evidence has brought the first humans closer to Ife closer to Sudan than the Bible story. This is important because Ile-Ife had moved 8 times according to Prof. Obayemi further away from Sudan and Nupe to the safer Rain Forest. The earliest date so far was the Yoruba artifacts in Iwo Eleru confirmed as around 10,000 B.C. This contradiction in religious belief leads to condemning infidel, kaferi as unbelievers by fanatics on religious opium.

Foreign religious dates have changed African history pandering to European belief, be subjected to ridicule, denial of missionary hospitals and schools for those that refused to convert to Islam, Christian, or Jewish religion. Even when there is no radio carbon verified dates of Christian or Islamic dates of life origin based solely on faith. Compared to African oral history held up to scientific standard. Non-believers on faith could lose their lives in the hands of charlatans and extremists on religious opium or those seeking converts.

In Ekhere, Egharevba wrote that the Obagodo, the first Ogiso, came to Benin from Ife with charm in form of a snail shell; afterwards cast in brass, containing some earth which vested power over land on him. He had written that “Ewedo was the one who put then reigning Ogiefa as the priest of the earth at the place the snail shell container of sand which Ogiso brought from Ife was buried and the place is also the shrine of the earth deity.”

Ogiefa had repeatedly come from Uhe to Benin city for the practice of medicine prior to his accompanying his master Prince Oranmiyan, hence every member of the family of Ogiefa is flattered ever since by the title “Ovbiaronto” (child of the pioneer). This account was discarded as it does not fit into the Hamitic hypothesis account (that everything of value ever found in Africa was brought by Caucasians) on origin of the empire and kingship of his later editions.

The foreign religions and ancestors infused in African history started with another fanciful claim by Sam Johnson. He earlier rejected it: Yoruba are certainly not of the Arabian family, and could not have come from Mecca — that is to say the Mecca universally known in history, and no such accounts . . . are to be found in the records of Arabian writers or any kings of Mecca; an event of such importance could hardly have passed unnoticed by their historians (Johnson 1921: 5).

Ogherevba also compromised his work to incorporate the committee’s work-Intelligence Report on Benin City in 1938, it became the first application of the Hamitic hypothesis to Benin history by an indigenous elite. Jacob Egharevba initial story both in Edo and later in English changed to accommodate some of these foreign “contributions”.

Every ethnic group seized on it claiming kinship to Egypt, Saudi Arabia and Israel ignoring the scientific data that it was Africans that moved around to those foreign lands. It is a case of old countries claiming to be from new areas: reverse migration contrary to scientific facts. Yet, some Africans still see themselves as Egyptians, Arabs and Jews!

It is not surprising to see rich Edo sculpture and language compared to that of Egypt and claims that they came from Egypt. What did not change was sojourn through Sudan and Ile-Ife. So, it is not only the Edo that ignored their neighbors they mixed with in their Rain Forest, each ethnic group claim autonomy or not knowing the same neighbors they had inter-married producing what is now referred to as new ethnic groups!

Olokun that Bini had in common with its neighbors as worship of the “Sea” (Olokun) was translated to Egypt: “Orao, Orao, Olokun N’oba as “Pharaoh, Pharaoh, the Red Sea” and is an invocation of King Pharaoh in the Red sea. (“Orao” as corrupt form of Pharaoh! Even the brass casting work common to Ife and Bini. Oba Oguola that had asked the Oni of Ife for a Brass smith and had Iguegha sent to him from Ife is now a matter of dispute between Edo historians.