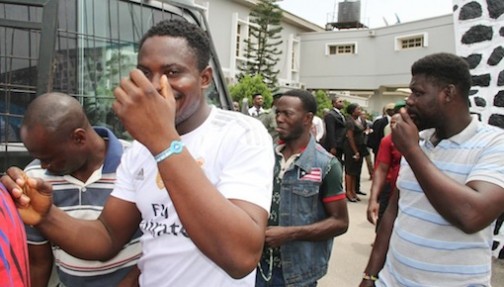 Some of the jailed oil thieves at the Federal High Court in Ikoyi, Lagos

They have pleaded not guilty. In the course of trial, the prosecution called four witnesses.

In his judgment, Justice Buba held that the prosecution had proven its case beyond all reasonable doubt. He therefore sentenced the convicts to two years imprisonment on each of the three counts, starting from December 2, 2014, when the convicts were arrested with an option of N200, 000.00k (Two hundred thousand naira) fine for each count.

The convicts are to forfeit all the seized vessels, cargoes and properties to the Federal Republic of Nigeria, while the jail terms will run concurrently.