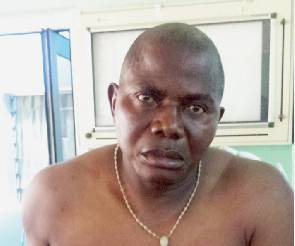 Officials of the Narcotics Control Board (NACOB) operating at the Kotoka International Airport (KIA) Thursday arrested a physically challenged man who was believed to have swallowed pellets of cocaine.

The suspect, Okeke Ambrose Ifedilichukwu, a 55-year-old Nigerian, arrived at the KIA aboard an Emirates aircraft en route to Dubai when he was arrested.

According to the Deputy Executive Secretary of NACOB, Nii Lante Blankson, the suspect left Abidjan for Accra where he was on transit.

He said while Okeke was on the flight, the airline officials realised that he was behaving abnormally and so as soon as the plane landed in Accra, he was referred to the Aviation Clinic at the airport for observation.

He said at that stage, officials of NACOB were informed about the situation and so they quickly went to the Aviation Clinic to interrogate the suspect, who admitted that he had swallowed pellets of cocaine.

The suspect explained that he had swallowed the pellets in Abidjan and was supposed to deliver them to somebody in Dubai.

After his confession, NACOB officials then took him to the Akai House Clinic in Accra for further observation.

An X-ray taken at the Akai House Clinic confirmed that the suspect had a number of pellets of cocaine in his stomach.

The clinic advised that he be medically observed while he expelled the pellets from his stomach.

The suspect was taken back to the Aviation Clinic for further observation and for him to expel the pellets.

Mr Blankson said, however, that while Okeke went back to the Aviation Clinic, his condition became critical and so he was quickly transferred to the 37 Military Hospital for further treatment.

As of the time of going to press, the suspect was being operated on to remove the pellets from his stomach to save his life.