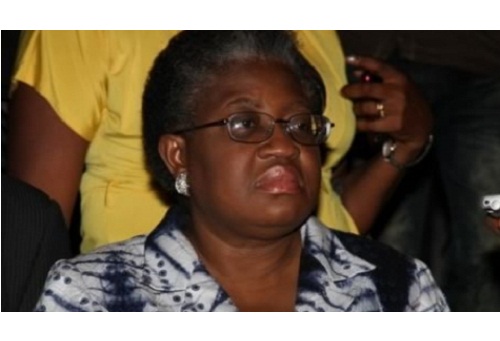 Minister for Finance, Ngozi Okonjo-Iweala, suffered a public attack on social network site, Twitter this afternoon after she responded to harsh remarks made at her. Okonjo-Iweala’s twitter handle, @NOIweala was barraged by users after she allegedly tweeted in response to @OccupyNaija.

@OccupyNaija tweeted at the two-time Finance Minister in response to claims that House of Representative members walked out on her during an interactive session Thursday.

The report that the House of Representative members walked out on Okonjo-Iweala, is a report she claims is false. @OccupyNaija read “I hope you’ll honourably resign from that office you hold than embarrassing your person in the international world.”
Okonjo-Iweala’s response was “Thanks but you should resign from Occupy you nattering nabob of negativism.”

But her response did not go down well with many as she suffered attack after attack on Twitter.

@Akin_Official tweeted that he was disappointed she was a minister. “Really disappointed in u being a minister” and her response to him was “no problem get another one am not only one capable of serving.” Okonjo-Iweala’s responses also raised questions of her temperament. ‏@TempXXL tweeted “Is this anger?” and she promptly responded that it was “no just fairness.”

If Okonjo-Iweala thought her response were in fairness she was in for a surprise as @OccupyNaija who started it tweeted again. “When you get results of your careless utterance on Twitter, I hope 1 day, you’ll get it on the streets where it really matters.”

But there was more from others who felt exasperated by her tweet. @AFOketunji tweeted, “she is just talking anyhow.” while @KrissyPearlie wrote “Wow. #TwitterBrawlAlert All we really want is respectable, transparent & accountable public officers o,” tweeted.

There were claims that Okonjo-Iweala did not post the tweet claiming that perhaps her account was hacked but that claim was quickly punctured. @Solar_unique “What are you now trying to say sir? Her acct was hacked? Her PR guys goofed? @NOIweala” definitely one of d 2.”
Okonjo-Iweala got some respite from Obiageli Ezekwesili, former Minister of Education who tweeted on her account ‏@obyezeks account. “I would bet any day that SHE did not post that tweet.) @NOIweala @OccupyNaija,” she tweeted.

NewsRescue– The minister of the economy had said she was not feeling well as she had not slept in 5 days.

The Chairman of the Committee, Dr. Abdulmumin Jibrin told her to go home and rest.

The minister said she will manage.it
The minister tried to put in words, saying it was a free country and she will talk to the people; complaining bitterly that she should not come to be abused and insulted.

The chairman sent her home for two weeks to go and rest, and to not ‘waste their time.’