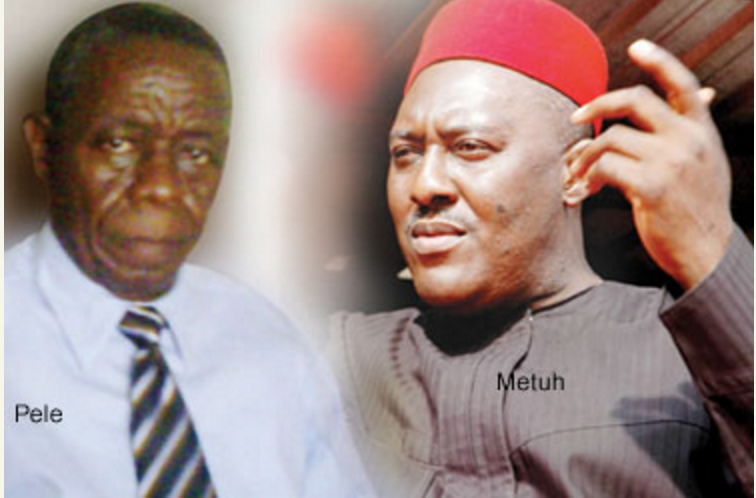 He was going about his duty at the last BNA visiting day when the National Vice-Chairman (South-East), Peoples Democratic Party, Mr. Olisa Metuh, invaded the school with his wife, policemen as well as aides and allegedly assaulted him and other teachers for confiscating his son’s GSM phone.

Metuh, a lawyer turned politician, allegedly held Pele by the throat and reportedly ordered an aide to put him in his car boot, saying “No police IG or SSS can secure your release.”

The incident, which occurred on February 19, 2011, caused panic among the teachers and over 50 pupils that witnessed the incident.

The affected teachers had filed a lawsuit seeking N250m for general damages, N10m for punitive damages and N350, 000 for medical bills. The writ was issued by Joseph Dauda (SAN), the Nigeria Bar Association President.

Pele told PUNCH METRO on Wednesday that he went to the hostels around 6.30pm to check if the parents had dispersed, when a teacher, Ms. Amuche Igbe, informed him that she saw Metuh’s son, Derrick, a former pupil of the school, giving his GSM phone to pupils to use in violation of the school rules.

The BNA VP explained that Amuche seized the phone, handed it to him and he dropped it in his office. But he said a few minutes after, three jeeps drove into the school premises at top speed and Metuh alighted from the lead car.

“The jeeps drove round and round and this attracted pupils and staff. Metuh alighted and said, ‘who is Pele here’ and I said I am. He said, ‘where is my son’s phone. Before I could speak, he held my throat and pushed me to the ground. He said his boys should put me and another teacher, Babatunde Adedayo, in the car boot and that no police IG or SSS can release us,” Pele said.

According to him, a teacher, Hamzat Muftau, who was pleading with the PDP leader to calm down, was knocked to the ground by one of Metu’s aides.

He alleged that Metuh’s aides forcibly held Mufutau’s hands and took away his office keys and phone in an attempt to get him to release Derrick‘s phone. Incidentally, Derrick is no longer a pupil of the school as he was withdrawn in December 2010 while in Senior Secondary 2.

Pele stated that the teachers, who were apprehensive that he might be killed, advised him to release the phone.

Pele said that the PDP leader had no right to visit the school as his son was no longer a pupil, adding that Metuh’s police aides did not intervene when he was being molested.

He added that although the incident was reported at Garki Police Station, the Investigating Police Officer identified simply as Felicia said ‘Metuh could not be arrested because he is a big man, but could only be invited.’

Igbe, who corroborated Pele’s claim, stated that she saw Derrick chatting with some female pupils and asked him to leave the school, but instead of leaving, he walked towards the male hostel, saying he wanted to retrieve his phone.

She said, “A pupil offered to get the phone for him, but Derrick insisted on collecting it himself. There is a gap in the gate through which a hand held out the phone, but before Derrick could take the phone, I collected it from the person, but I could not identify the pupil who brought it out.”

Muftau also explained that every attempt to placate Metuh on the day was rebuffed as he insisted on having the phone. “As I was begging him to take it easy, he said I should just get him the phone, and that it is very expensive and can buy 200 of my own. As I moved closer to him, his aide kicked me in the legs and I fell; he said I was touching his boss. I suffered body pains, but I am better now.”

Another eyewitness, Adedayo, a housemaster, described the incident as a show of shame, which might have degenerated into a serious violence if more staff were around.

“When Metuh grabbed the VP by the throat, I moved to intervene, but he asked his aide to put me and the VP in the boot of his jeep, and boasted that no IG or SSS can release us,” he explained.

A board member of BNA, who does not want to be named, expressed dismay that Metuh, a former board member of the school, would assault teachers in the presence of pupils.

“Why I am surprised is that he is a friend of the owner of the school as well as a former BNA board member. The teachers have gone to court and he will meet them there,” she said.

But when contacted, Metuh said nobody was man-handled, insisting that the allegation was “a lie to cover up their (the teachers’) incompetence and stupidity.”

“Why do they have to victimise a pupil because he left the school? My son and wife were the victims. I don’t want to take issues with them because the owner of the school is my friend. But I welcome the law suit; let them serve me the writ.”

The FCT Police Public Relations Officer, Moshood Jimoh, however, said nobody was above the law. He said he would find out about the matter from the Garki Divisonal Police Officer.