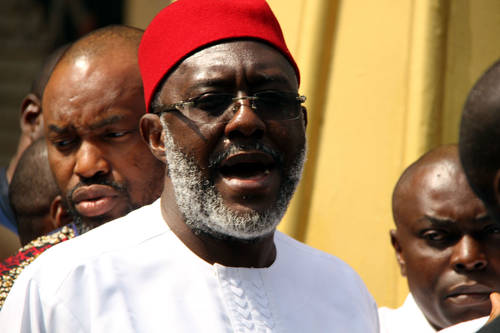 Former PDP spokesman, Olisa Metuh has let out a plea to Nigerians to forgive him and allow him go abroad for spine surgery.

The man being charged in court for squandering billions of naira made the call outside the court premises. he pleaded that his spine was really bad and he was afraid of surgery which could lead to paralysis (as many Boko Haram victims and other ordinary Nigerians have been paralyzed un-needfully) and that as such he rather have the surgery abroad.

Metuh said he had retired from politics because of how bad his spine was and that it was when he fell from a chair in a PDP meeting that the spine compressed so bad.

Olisa Metuh’s case had had to be postponed after he vomit in court.

Millions of Nigerians are unable to access advanced care due to corruption of the PDP former government, and its forefather military dictatorships past.

Even though many PDP members have crossed to the APC ruling party, Nigerians are hopeful.